Barry Goldsmith avoided doctors' offices. But headaches and scary blood pressure spikes masked a festering problem that suddenly could have killed him. 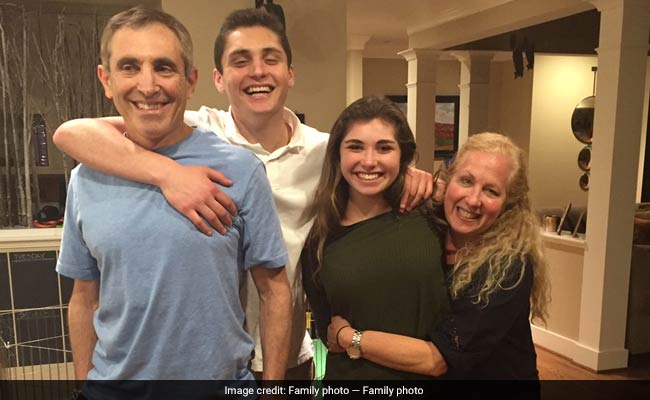 Barry Goldsmith went to great lengths to stay out of the doctor's office.

His belief in the power of exercise - particularly running - to keep him fit and healthy had long been an article of faith. If he wasn't feeling well Goldsmith would lace up his shoes and "run it off." The Maryland patent lawyer routinely racked up about 30 miles per week - more when he was training for a marathon or triathlon - interspersed with swimming, cycling and weight training.

For more than 30 years, his strategy worked.

"Barry is incredibly fit and he's always been this major athlete to avoid seeing doctors," said his wife, Paula, a former teacher. His aversion persisted even after his sister became a family physician.

But several years ago, Goldsmith, now 56, experienced a series of alarming episodes he couldn't outrun.

They followed a pattern: first a rush of what felt like acid would shoot up Goldsmith's legs. Then came 10 minutes or so of pounding heart palpitations that ended with a wave of nausea.

At first, the episodes were sporadic. But eventually they increased in frequency and duration, leaving Goldsmith crumpled on a neighbor's lawn at the start of a run.

The couple were shocked to discover that Goldsmith's problem was potentially fatal and had been germinating for years, partly camouflaged by his stellar level of fitness.

"Being in good physical health was a blessing and a curse," Goldsmith said recently. "The longer I waited, the more I put myself at risk."

Goldsmith first noticed the problem in 2014 at the end of a cross-country flight. Landing in California, he stood up and felt the rush of acid, palpitations and nausea, which subsided fairly quickly.

Maybe, Goldsmith remembers thinking, he had been sitting too long. When the episodes recurred every month or so, he found them "concerning," but for months did not mention them to his wife or his internist whom he saw every year or so. In 2015, he developed occasional morning headaches.

Goldsmith consulted the cardiologist he had seen as a precaution for a low heart rate, which can result from vigorous exercise, but did not mention the episodes. The doctor said that Goldsmith appeared to be healthy.

By 2016, the morning headaches were occurring more often. At times Goldsmith felt tired, but assumed he was getting older or hadn't slept well.

"We both just kind of ignored it," Paula said. "Nothing intensified and most days he was fine."

But during a 5K race in July 2017, Goldsmith felt so weak he had to stop midway and walk to the finish line. The palpitations and nausea were more frequent.

Goldsmith called his sister, who suggested he see an endocrinologist. Some of their relatives had thyroid problems; perhaps he did, too.

The endocrinologist he saw in September ordered blood tests, which revealed a slightly sluggish thyroid. During the visit, Goldsmith mentioned in passing the running problem, which hadn't recurred, and his morning headaches. The endocrinologist suggested he might want to try thyroid medication and recommended that he return in three months.

By late fall, Goldsmith was having more trouble completing a run; his headaches had become a near-daily event.

An ophthalmologist friend suggested that he might be experiencing blood pressure spikes, even though his readings in doctors' offices were normal. That made sense: both his parents had developed mild hypertension in their 60s.

At his friend's suggestion, Goldsmith bought a blood pressure cuff. He immediately suspected the device was malfunctioning: the readings at times were off the charts - so high they couldn't possibly be accurate, he thought. One registered 204/118, a reading consistent with a hypertensive crisis, which can require emergency treatment. At other times they were normal, about 125/85.

Despite Paula's increasing insistence that he call his doctor, Goldsmith waited a month. He said he wanted to see if the readings stabilized.

"I kept pushing, but he fought all of it," she recalled. "He downplayed everything. That was his style," a characterization with which Goldsmith agrees.

In December, Goldsmith acceded to his wife's wishes and saw one of his internist's partners. His blood pressure reading in the office was a worrisome 170/87. Goldsmith told the doctor, who prescribed medicine to reduce his blood pressure, that he was switching jobs and under a lot of stress. Goldsmith took the medicine faithfully, but the spikes continued.

In January 2018, Goldsmith returned to the endocrinologist, accompanied by Paula. He mentioned the blood pressure spikes and headaches. The specialist ordered blood tests to check Goldsmith's hormone levels and convinced him to start taking a low dose of medicine for his underactive thyroid.

As they were leaving the office Paula suggested they stop at the lab downstairs for the tests the endocrinologist had ordered. Goldsmith demurred: he hated needles. His internist had recently increased the dose of his blood pressure drug and he said he wanted to see if the new regimen worked before getting the blood tests.

But the increased dose of blood pressure medicine, later augmented by a second drug, made him feel worse. And Goldsmith had developed a new symptom: profuse sweating.

Doctors told him that calibrating the proper dose of blood pressure medication can be tricky and suggested he change the timing.

In May, things fell apart.

During a run with friends, Goldsmith stopped after less than a mile. He then vomited and sank onto a neighbor's lawn, too weak to stand.

Paula arrived minutes later. By then he seemed to have recovered somewhat.

She remembers feeling furious and terrified. "I said, 'This is not working! You're damaging your heart. You need to find a blood pressure specialist,' " she remembered.

Goldsmith went online to see what he could learn about the causes of blood pressure spikes. References to a rare, typically benign tumor of the adrenal gland called a pheochromocytoma kept popping up. The symptoms sounded familiar: sudden hypertension or blood pressure spikes, profuse sweating, rapid heart rate, weakness and headaches. These result when the tumor releases uncontrolled bursts of hormones including adrenaline, particularly in response to physical exertion or stress. Adrenal hormones help control many functions including heart rate, metabolism, blood pressure and response to stress.

Goldsmith emailed his internist and asked if it was possible that he had such a tumor, known in medical jargon as a "pheo."

The internist replied that it was and told him to call the endocrinologist.

A week later, he was back in her office. The doctor told him that one of the blood tests she had ordered six months earlier - which he had not gotten - could have helped answer this question. It measured the level of catecholamines - hormones secreted by the adrenal glands, the paired organs atop the kidneys. Elevated levels of these hormones can signal an endocrine tumor.

Goldsmith's levels turned out to be far above normal.

The endocrinologist sent him for an abdominal CT scan, which revealed an enormous tumor, roughly the dimensions of a small acorn squash, engulfing his right adrenal gland. It was probably a pheo, about 10 percent of which are malignant.

The tumors, which are diagnosed in about 2 of every million adults annually in the United States, are rarely the cause of high blood pressure, accounting for 0.2 percent of hypertension cases.

Pheos often develop for unknown reasons, but in at least 25 percent of cases, genetic factors play a role. Doctors consider the tumors a "time bomb"; they can cause a stroke, kidney failure, heart attack or sudden, unexplained death. Treatment typically involves surgery to remove the tumor, along with the affected adrenal gland.

The size of Goldsmith's slow-growing tumor - 10 centimeters - made laparoscopic removal a challenge that would require two surgeons, she told the Goldsmiths.

"It's clear he's had it for many years," Felger said.

Although frightened by the prospect of surgery and the risk of sudden death posed by such a tumor, Goldsmith said he was reassured by Felger's experience, her straightforward manner and by the fact that she, too, was a runner.

Felger, who has performed more than 250 such surgeries, ticked off possible complications, which include postoperative heart problems and blood loss requiring a transfusion.

Goldstein first needed to take drugs to stabilize his blood pressure, which could shoot up significantly during the operation.

For Paula, the two week pre-op period crawled by, dominated by the specter of her husband's sudden death. Every morning, she said, she awoke wondering whether he was still alive.

"I didn't want to leave his side," she recalled.

Felger said that the June 29 procedure "went perfectly." He was scheduled to spend two days in the intensive care unit and a total of five days in the hospital, but Goldsmith was well enough to be discharged the day after his surgery.

Six weeks later, with Felger's approval, Goldsmith resumed running, although initially at a slower pace and a reduced distance. His blood pressure remains slightly elevated, which is common after surgery. He will require lifelong monitoring to make sure the tumor doesn't recur, which is rarely the case.

In the months before his diagnosis, Goldsmith said, fear was an obstacle: he was increasingly afraid of what doctors might find.

In retrospect, he wishes he'd acted with greater dispatch. "I could have saved a few years," he said.

(Except for the headline, this story has not been edited by NDTV staff and is published from a syndicated feed.)
Comments
Barry Goldsmith