It could grow to about 13 feet tall, with a wingspan of up to 30 feet, making it one of the largest flying animals ever. 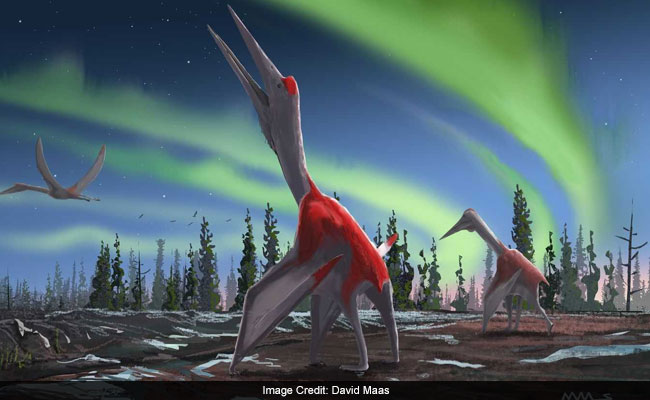 An artist's illustration of the Cryodrakon boreas, a new species of pterosaur.

A new species of Pterosaur, a flying reptile, has been identified in the vast, dry terrain of Canada's badlands. On Tuesday, it was anointed as "Cryodrakon boreas," Greek for "Frozen dragon of the north wind."

The discovery may sound like something out of Westeros, but "Game of Thrones" fans shouldn't get too excited: According to researchers, Cryodrakon looked less like Daenerys Targaryen's fire-breathing dragons than it did a giraffe-size, reptilian stork.

The carnivorous animal lived in modern-day Alberta during the Cretaceous period about 77 million years ago, according to a new study in the Journal of Vertebrate Paleontology. It could grow to about 13 feet tall, with a wingspan of up to 30 feet, making it one of the largest flying animals ever. It had no chewing apparatus, so it would likely eat whatever was small enough to go down the gullet, including lizards, mammals and baby dinosaurs.

Like other pterosaurs, the Cryodrakon had awkward proportions with a long neck, huge wings and a head about 3 1/2 times the size of its body. As one expert said, imagine a "giant flying murder head." Alternatively: "a pair of wings that carry around a big head for guzzling things."

Researchers said that while the pterosaur's new name was more inspired by Alberta's frigid landscape than it was by "Game of Thrones," they were aware that it might elicit some comparisons.

"Yes, we had a good, personal chuckle about that," said Michael Habib, a paleontologist at the University of Southern California and a fan of the show.

Francois Therrien, curator of dinosaur palaeoecology at Alberta's Royal Tyrrell Museum of Paleontology, noted that while modern-day Alberta is known for its harsh winters, the landscape that the Cryodrakon would have soared over in the late dinosaur age would actually have been a tropical paradise near to a large inland sea.

The fossils that were used to establish the Cryodrakon's holotype - a single specimen upon which the new species is established - were discovered some 30 years ago in Alberta's Dinosaur Provincial Park, known for being one of the richest sources of dinosaur fossils in the world. Until recently however, the remains were thought to belong to an already known species of pterosaur, called the Quetzalcoatlus, that was first found in Texas.

Habib, one of the few scientists in the world who has worked extensively with Quetzalcoatlus fossils, said that when he first saw the Canadian pterosaur four years ago, he had a hunch that it was not what he had seen before. While its neck bones were long like a typical Quetzalcoatlus, its proportions did not match.

He enlisted the help of David Hone, a specialist in pterosaur taxonomy, who realized that the remains in Alberta were exceptionally well preserved. The skeleton that researchers worked with consisted of parts of the animal's wings, legs, neck and rib - a remarkable sample, he said, given that the bones of these types of reptiles tend to be thin and fragile, causing them to disintegrate over time.

"This type of pterosaur [azhdarchids] is quite rare, and most specimens are just a single bone," Habib told SciTech Daily. "Our new species is represented by a partial skeleton. This tells us a great deal about the anatomy of these large flyers, how they flew, and how they lived."

Hone had a "Eureka moment" early on when he discovered a particular pattern of holes in the fossils that seemed unique, but it took him and the other researchers several years more to cross-check the specimen with pterosaur remains in Mongolia, France and elsewhere to confirm that this was a new species, he said.

Now that they have, however, the possibilities for future research are expansive, Therrien said.

"I tell my students all the time, taxonomy is the most fundamental bit of biological science," said Hone, director of the biology program at Queen Mary University of London. "If you don't know what species you've got, how do you know what else is going on?"