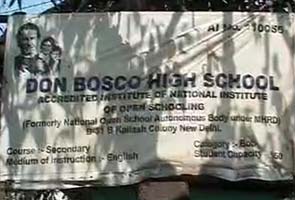 Pune: The vice-principal of one of Pune's best-known schools has been arrested for allegedly molesting a student. He has been remanded to police custody till January 25

A 14-year-old student of the Don Bosco convent in Yerwada had complained that the teacher, who is 54, molested her earlier this month in his office.

The vice-principal Father Iju Francis Falkau, was brought to a court in Pune today. In a statement, Don Bosco school said, "The institution categorically denies the allegations framed on the vice principal...the institution gives the highest priority to the security and care of its students...''

Father Falkau joined the school in Pune about six months ago. Teachers supporting him say that the girl who has accused him of molesting her was upset because he reprimanded her for using her cellphone in school.