The KCR Phenomenon: The TRS Chief's Journey To The Top

Set to become the chief minister of India's youngest state for a second time, Mr Rao's has been an enviable political journey.

KCR defeated his nearest rival in the just-concluded polls by over 50,000 votes.

K Chandrashekar Rao, who led his party to a power-packed performance in Telangana assembly polls that left the opposition in tatters, was today elected unanimously the leader of the TRS legislature party.

Set to become the chief minister of India's youngest state for a second time, Mr Rao's has been an enviable political journey.

From living a life of near anonymity as a Congress foot soldier to becoming the mascot of Telangana pride who brought the then mighty Congress down to its knees and wrested statehood, he has navigated the choppy waters of politics with the adroitness of a masterful oarsman.

With the emphatic victory of the TRS, the party he founded with the sole aim of realising the decades-old dream of a separate Telangana, Kalvakuntla Chandrashekar Rao, 64, has reinforced his position as the tallest leader of the youngest state of the Indian union.

KCR, as Mr Rao is popularly known, has been one of the votaries of a broad-based non-BJP and non-Congress federal front, and the win would further fortify his position as a regional satrap.

Mr Rao's decision to dissolve the House in September, several months before its tenure was to end, and go for an early election, is being seen as a masterstroke, as national issues might have overshadowed those of the state if simultaneous elections were held for the Lok Sabha and the state assembly.

A canny politician that he is, Mr Rao was first off the blocks when he announced the names of 105 candidates for the 119-member assembly barely a couple of hours after recommending its dissolution.

TRS nominees hit the ground running and the gamble paid off.

Mr Rao retained a majority of his MLAs, leaving some of the ticket hopefuls dejected, but he managed to silence whimpers of protest and keep his flock together.

The TRS supremo whipped up the issue of 'Telangana pride' by repeatedly targeting his former boss and Andhra Pradesh Chief Minister N Chandrababu Naidu, accusing him of having stalled the development of Telangana and calling him an outsider.

The self-proclaimed farmer from Chintamadaka village in Medak district, whose assets soared 41 per cent in the last little over four years to Rs 22.6 crore, cut his political teeth in the Indian Youth Congress as an ordinary member.

Mr Rao joined the Telugu Desam Party (TDP) founded by film icon N T Rama Rao in 1983. His first outing at the hustings the same year ended in failure when he lost to the Congress candidate in Siddipet.

He wrested the seat in 1985 and there was no looking back for him ever since. Mr Rao won 13 elections to the Lok Sabha and state assembly on the trot. He won Karimnagar, Medak and Mahbubnagar Lok Sabha seats five times, including twice in by-polls. 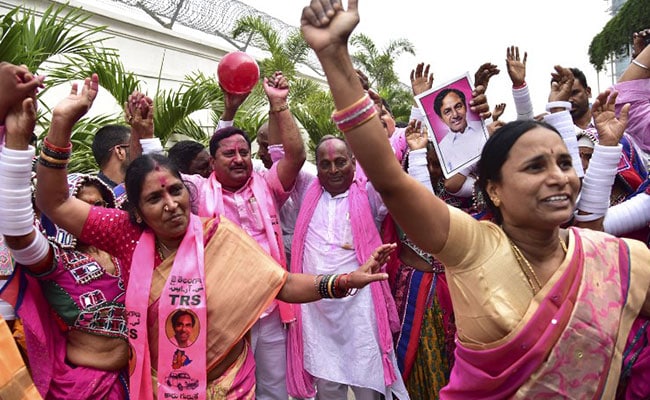 Mr Rao became a minister in the NTR government and subsequently that of his son-in-law N Chandrababu Naidu. He was also the deputy speaker of the Andhra Pradesh Assembly.

However, the dream of a separate Telangana never left him. Mr Rao quit the TDP in 2001, accusing Chandrababu Naidu of discriminating against Telangana. He floated the Telangana Rashtra Samithi, and revived the statehood movement that lay dormant for years after the late 1960s.

After his stupendous win in Tuesday's vote count, he took a dig at Mr Naidu, whose party fared abysmally, pocketing just two seats, saying he would give a "return gift" to his former boss for contesting elections in Telangana.

He joined hands with the Congress that promised statehood for Telangana and fought the 2004 Lok Sabha polls in alliance with it.

The TRS won five seats and Mr Rao was made a cabinet minister at the Centre but walked out of the alliance after accusing the Congress of not being serious about creating Telangana.

In the 2009 assembly elections, TRS allied with the TDP after the latter agreed to extend "unconditional support" for creation of Telangana.

Mr Rao and his TRS remained a fringe player in undivided Andhra Pradesh as the Congress returned to power in 2009 under the charismatic Y S Rajasekhara Reddy.

Following Mr Reddy's death in a helicopter crash in 2009, Congress plunged into turmoil as his son revolted against the party high command over the leadership issue.

Sensing an opportunity, Mr Rao began a fast unto death for Telangana statehood. As Telangana plunged into turmoil with mass protests and suicides by young men, glory came to him who ended his 11-day fast following an announcement by the then Union Home Minister P Chidambaram on December 9, 2009 that steps will be taken for Telangana's formation.

However, in a set back for the TRS boss, the UPA government buckled under pressure from people of coastal Andhra Pradesh and Rayalaseema region who protested the "unilateral" announcement. The government felt more consultations were needed before the new state could be formed.

Mr Rao steeled himself for the battle ahead as he went about convincing people of the Telangana region that "injustice" being done to them could end only if it was granted statehood.

He breathed fire and brimstone with slogans like "Telangana waley jaago, Andhra waley bhago (People of Telangana arise, those of Andhra run away)". He threatened a "civil war" and "bloodbath" if Telangana was not created.

And when the new state was born, TRS had 11 of the 17 Lok Sabha and 63 of the 119 assembly seats. Having realized his Telangana dream, he fortified his position as nearly 20 MLAs from the TDP, Congress and other parties switched over to the TRS.

With Telangana firmly under his belt, the political craftsman, a blend of abrasiveness and accommodation, could well seek greater space for himself in national politics should a non-BJP, non-Congress front materialise amid growing aspirations of regional satraps eyeing a piece of New Delhi's power pie.