Jitendra Singh was inducted as the minister of state in all-powerful Prime Minister's Office in 2014 as a first time Lok Sabha member. 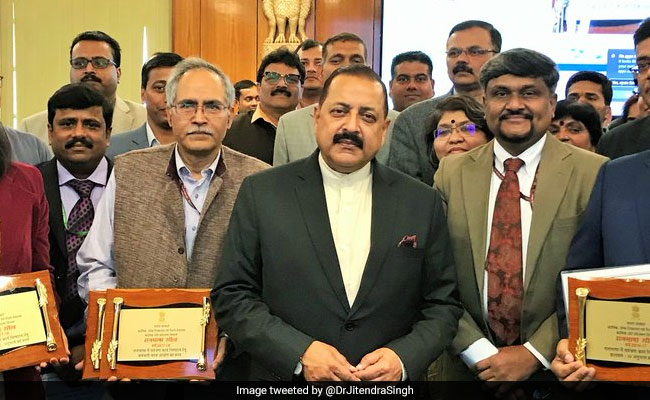 Jitendra Singh on Friday took charge of the Ministry of State for Personnel, Public Grievances and Pensions with a focus on making governance more citizen-centric.

From curing patients to streamlining bureaucracy, Jitendra Singh has worn many hats in his career.

Mr Singh's potential earned him recognition in the national political scene after he rose from state-level politics in Jammu and Kashmir. He was inducted as the minister of state in all-powerful Prime Minister's Office in 2014 as a first time Lok Sabha member.

Always affable, Mr Singh was the minister of state for personnel, public grievances and pensions, Department of Atomic Energy and Space until the dissolution of 16th Lok Sabha recently.

The doctor-turned-politician was the minister of state (independent charge) in the Ministry of Development of North Eastern Region.

Mr Singh won the second time from the Udhampur constituency in Jammu and Kashmir, defeating Congress's Vikramaditya Singh with a record margin of over 3.57 lakh votes in the recent Lok Sabha elections.

He was administered the oath as minister of state with independent charge by President Ram Nath Kovind at Rashtrapati Bhavan today.

Many key reforms like abolishing interviews at junior-level recruitment in government jobs and doing away the need for attestation by a gazetted officer were brought in during his tenure to ease governance and make it citizen-centric.

He also brought major changes in resolving governance-related grievances received from people across the country, which was one of the key focus areas of the government.

Mr Singh's ministry played a crucial role in processing appointment in the country's first anti-corruption ombudsman Lokpal that also took shape during his tenure as the personnel minister.

He had been vocal about his views for the welfare of his home state, at times facing the ire of local politicians there.

His handling of critically important matters related to bureaucracy, governance and approach towards the development of the north-eastern region was praised by many, including his party BJP and the RSS, its political ideologue.

Mr Singh wears many hats - a medical practitioner, author, professor and newspaper columnist. He has authored six books and chapters in about a dozen textbooks for postgraduate course in medicine.

An MBBS and MD (Medicine), Mr Singh was educated at Stanley Medical College, Chennai and at the All India Institute of Medical Sciences, New Delhi.