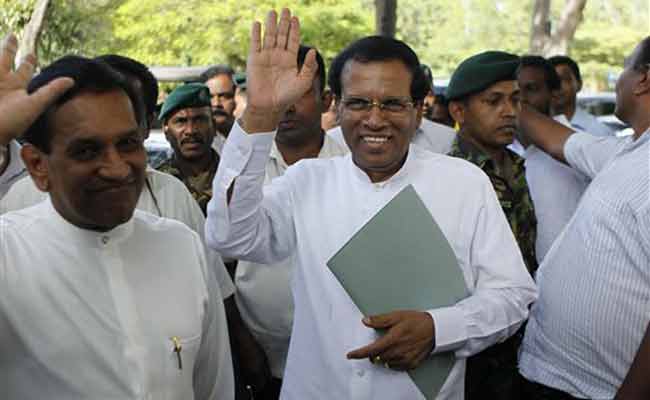 In this November 21, 2014 photo, Sri Lankan Health Minister Maithripala Sirisena, (centre), acknowledges the gathering as he arrives for a press briefing in Colombo. (Associated Press photo)

Colombo: In a result unthinkable just weeks ago, Sri Lankan President Mahinda Rajapaksa has conceded defeat to his former friend and health minister, Maithripala Sirisena, who defected from the ruling party and turned the election into a referendum on the president and the enormous power he wields over the island nation of 21 million.

Early on Friday, Rajapaksa's office said he has bowed to the people's decision and left Temple Trees, his official residence.

Maithripala Sirisena was a low-profile minister until he emerged as the best hope for a fractured opposition to topple Rajapaksa, who was seeking his third term.

The 63-year-old became an unlikely rallying point for disaffected Sri Lankans since he walked out of Rajapaksa's government a day after sharing dinner with the strongman president.

He has pledged to abolish the executive presidency within 100 days and return the country to a Westminster-style parliamentary democracy where the police, the judiciary, and the civil service will be independent institutions.

Rajapaksa had removed the two-term limit on the presidency and given himself more powers soon after winning a second term in 2010 in what critics say were signs of growing authoritarianism.

"He is a mild-mannered, soft spoken politician," said retired senior civil servant and former colleague Austin Fernando of the man set to be Sri Lanka's next president.

"He is unabrasive. A likeable chap who can easily command respect."

Dressed in the white sarong and tunic favoured by Sri Lankan politicians, Sirisena appeals to a rural electorate while his main backer, the centre-right United National Party (UNP), is more popular in urban areas.

The government accuses him of being a proxy of former president Chandrika Kumaratunga, who came out of retirement to boost his electoral fortunes by asking her loyalists to vote for him.

He had said he would make UNP leader and former premier Ranil Wickremesinghe his prime minister if he won.

The son of a World War II veteran, Sirisena entered parliament in 1989 after settling in the eastern district of Polonnaruwa.

He was a soft target for the Tamil Tiger rebels during the height of fighting and says the separatists may have tried to assassinate him on at least five occasions.

He was jailed for nearly two years after being arrested on suspicion of leading a revolt against the government in 1971 when he was just 20.

After his defection from the government, Rajapaksa kicked Sirisena out of the Sri Lanka Freedom Party although he insists he is still a member.

His vision for the country ties in closely with the free-market, investor-friendly policies of the opposition UNP which provided him with the political base to challenge Rajapaksa.

Promoted
Listen to the latest songs, only on JioSaavn.com
"What I promise is a political and social transformation," Sirisena had said at his final election rally in Colombo on Monday.