What Modi Signalled With Excursion To Nimu - by Mukul Kesavan

The Prime Minister's appearance at Nimu illustrates the challenges that confront political leaders when they stage public events in the aftermath of military confrontations. The visit was significant because Nimu is a forward area in Ladakh and when India's head of government chooses to address his troops in the vicinity of a conflict zone, it seems like a statement of intent. Imagine the escalation in tension and expectation if the Chinese premier (or Xi Jinping himself), had visited a Tibetan prefecture close to the border to make a muscular speech after the Galwan clash. The fact that a scheduled visit by the Defence Minister was postponed so as to vacate the stage for the Prime Minister, invested the event with even greater significance.

So, what did it signify? The Prime Minister's speech and his itinerary suggests that he was addressing a domestic audience, or rather, a domestic audience made up of three constituencies. These were the troops in front of him seated in socially distanced rows of chairs in a desolate terrain. Elsewhere, there was the large constituency of former soldiers and veterans outraged by the Chinese ambush who are politically significant because at times like this they help make the political weather. Encompassing both constituencies was the nation at large waiting to hear how its Prime Minister, avowedly committed to meeting military aggression with swift retaliation, planned to deal with China's violent encroachment.

It became clear that the speech's forward location did not betoken a more forthright posture. Apart from paying tribute to the valour and sacrifice of the soldiers arrayed in front of him, the Prime Minister spoke in general terms about the futility of 'expansionism' and India's readiness, despite its peaceful nature, to defend itself against aggression. In keeping with the tenor of his speeches to India's Chief Ministers and the recent all-party conference, he did not name the enemy. 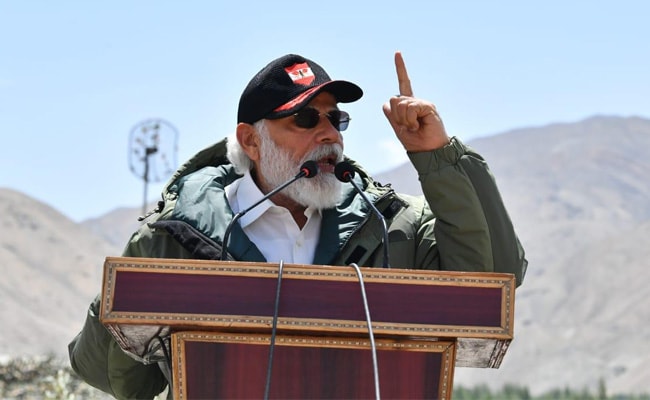 From a nationalistic point-of-view it was disappointing that the Prime Minister did not specifically refer to China. If not calling China out by name was prudent considering the balance of power at the Line of Actual Control, it was also anticlimactic, given the venue and the Prime Minister's reputation as the grandmaster of the military riposte. Twenty Indian soldiers had been beaten to death by Chinese troops who were now squatting on land they hadn't controlled before and yet it was deemed impolitic to call a spade a spade. Earlier, his Minister for Information Technology, Ravi Shankar Prasad had described the banning of Chinese apps as a 'digital strike', investing the proscription of TikTok with the dash and brio of the 'surgical strikes' against Pakistan.

The Prime Minister, keenly aware of the need to assert India's authority over its violated borders, chose to symbolically claim contested terrain by claiming the Indus as it flows through Ladakh for 'Hindu' India. He presided over a Sindhu Darshan puja, complete with religious chanting and conch shells on the riverbank. He lobbed a coconut into the water and ceremonially emptied a kalash. The Zee news anchor, on precisely the same wavelength as the Prime Minister, described the ceremony as not just a puja, but an act of deep symbolic significance. By worshipping the Sindhu/Indus from which Hindu/India are derived, Modi was, without naming China, putting it on notice, letting it know that he was ready to fight for eternal (sanatan) India. Ravi Shankar Prasad would have described it as a 'spiritual strike'.

The Prime Minister has been consistent in affirming what he sees as Hindu India's sacred geography. In recent times, he has courted the image of a sage-king. After Balakot and before the general election, he was photographed tranquil in a Himalayan cave like a hibernating yogi. And now, after Galwan, came the Sindhu puja. To give credit where it is due, the Sindhu puja in Ladakh was invented by Lal Krishna Advani in 1996. Unluckily for Advani, his mincing persona did no justice to his feral ideas. The Prime Minister, Advani's ideological heir, having learnt from his mentor's charisma bypass, has cultivated a kingly mien: a Hindu ruler for a Hindu nation. 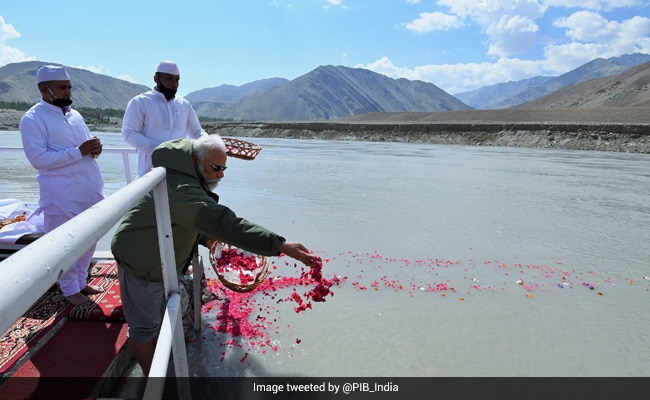 The irony of the confrontation with Xi is that China is what Modi and his party would like India to be: a systematically majoritarian nation state. The Chinese communist party harnessed Stalinism to the cause of Han supremacy. By secularizing Han bigotry in the name of Sinification, the CCP created what Golwalkar would have hailed as a Han-du state. The institutionalized extinction of Uighur Muslims in Xinjiang, the relentless encroachment on land and sea frontiers disputed by other nations, showcase China's deployment of massive state capacity over the long term to achieve tyrannical dominance.

Politically, the Prime Minister has proved himself to be a long-distance runner but in policy matters, he doesn't seem to operate within a coherent long-term framework. He has a magician's knack for the gasp-inducing gesture like demonetization or the lockdown. He's matchless at making things disappear, less good at making them reappear or work. His visit to Nimu could have signaled resolve (by calling China out) or reconciliation (by focusing on the valour of India's soldiers). By choosing an in-between position, he ran the risk of playing to the Chinese stereotype of India as a passive-aggressive neighbour, willing to wound but reluctant to strike.

The Prime Minister's speech at Nimu and his Sindhu puja might have been aimed at a domestic constituency, but in an inter-connected world, it is hard to segregate audiences. His address to the earlier all-party meeting had been circulated immediately afterwards on Chinese networks, subtitled in Mandarin. His words and actions in Nimu were closely followed by Chinese observers. If the Prime Minister was chary of naming China, his tact was wasted on the Chinese who were quick to flag his disquisition on expansionism as an attack on China. This was apparent from the response of the Chinese Embassy in New Delhi, hours after the Prime Minister's speech. Its spokesperson responded directly to the charge of expansionism: "It's groundless to view China as 'expansionist', exaggerate and fabricate its disputes with neighbours."

The Prime Minister's instinct for the public mood might have been the motive force behind his visit to Nimu; only time (or the next election) will tell if he achieved his domestic objectives. But if the visit's foreign policy outcomes are limited to India appearing provocative (when the Prime Minister was trying to avoid that implication), or seeming hamstrung (in his recourse to ritual and symbolism), it's hard to see the strategic upside to his high-altitude excursion.

Opinion: Has The War Made China Even More Important?