After a tightly centralized vaccination drive that has delivered the required two shots to less than 2% of the population, India is opening up its inoculation strategy in the middle of a raging pandemic. Can the new approach flatten the curve?

Expanding the campaign to all adults below 45 starting next month is a late but welcome move. India's daily infection rate of almost 350,000 is the worst any country has experienced. Even then, shifting a big part of the financial burden to 28 state governments and letting private hospitals buy shots at 600 to 1200 rupees ($8 to $16) apiece - and sell them to patients at even higher prices - are both wrong.

In a nation riddled with inequalities and swelling with 75 million newly impoverished after last year's coronavirus lockdown, putting a price on any part of limited vaccine supplies could lead to unjust, lopsided distribution. Free, universal access, with New Delhi negotiating prices with at least four or five suppliers globally, could prepare India better for a third Covid-19 resurgence. Until herd immunity is achieved, private hospitals must continue acting as agents of the state, and impose only a limited markup on the stock they're given free from the national pool.

It was a mistake to restrict the drive to just two Made-in-India vaccines: Covishield, the AstraZeneca Plc shot manufactured by the Pune-based Serum Institute of India Ltd., and Covaxin, an indigenously developed shot produced by the Hyderabad-based Bharat Biotech International Ltd. New Delhi managed to negotiate a competitive price of 150 rupees per shot, and then set out to distribute them free of charge - first to healthcare and other frontline workers and then to those older than 60. Only this month, the age restriction was lowered to 45. Covishield has accounted for roughly 90% of the 141 million doses administered so far. Nowhere near enough for a population of almost 1.4 billion. 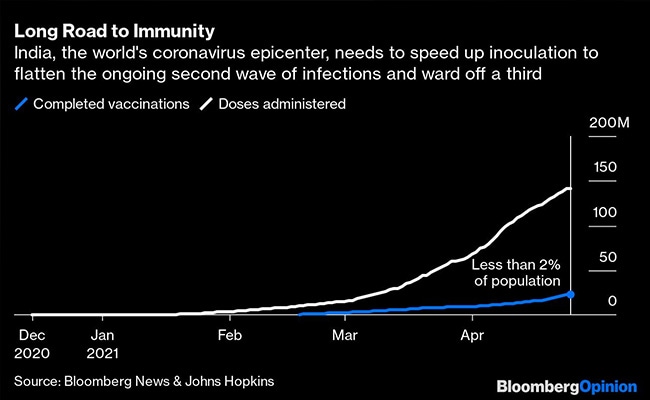 The second wave has exposed the inadequacy of the tightfisted approach. A severe oxygen shortage is causing the healthcare system to collapse, forcing authorities to change tack: State governments and private hospitals can directly order up to 50% of Serum and Bharat's supplies to inoculate the younger population, while New Delhi will buy the other half to complete free vaccination of those above 45. Serum has announced a price of 400 rupees for states, and 600 rupees for private hospitals. Bharat's rates are 600 and 1200 rupees, respectively.

Maharashtra, the state most severely affected by the second wave, might join a growing number that have announced free vaccination for all adults, according to media reports. Suppose that all states - even the most resource-strapped ones - somehow find the money. The supply of vaccines is constrained. For a given 1 million doses, who will decide the allocation among states, and between those governments and a private hospital? When the antiviral remdesivir is selling on the black market at a 300% premium, risk of profiteering is very real.

The only correct consumer price is zero. After last year's national lockdown, the urban poor are once again facing the brunt of lost livelihoods from localized curfews and all-pervasive fear. The world's biggest democracy can't shut anyone out of the market for vaccines. That may well happen if a state's purchase order goes unfilled - even as doses are available at private hospitals at a price the poor can't afford.

Maybe the supply crunch will ease. Russia's Sputnik V, initially imported and then made locally, should be available by the end of next month. Other homemade options might take longer. Hyderabad-based Biological E Ltd., which is conducting clinical trials in India for an antigen developed by Texas Children's Hospital Center for Vaccine Development, has won U.S. funding to ramp up production capacity to 1 billion doses in India by the end of this year. States can also import shots in use globally at prices preset by their manufacturers. But given the worldwide supply constraints, it's safe to assume that Serum's hold isn't going to reduce meaningfully soon. Introducing the logic of free markets into a situation that's anything but makes no sense.

Without getting into a fruitless debate over what is a reasonable profit margin to spur production, three things should be clear. One, it's the Indian government, with its 350 billion rupee vaccination budget, that should be inoculating everyone. Free of charge.

After the current spike has peaked, people will still need to be inoculated at a rapid pace to flatten the curve and avert a third buildup.

Two, while states don't have any bargaining power against vaccine producers, New Delhi has plenty of carrots and sticks at its disposal. Bharat Biotech's product has resulted from publicly funded research; it was authorized for emergency use even without Phase 3 clinical trial data. The government, albeit belatedly, is giving both Serum and Bharat financial assistance to ramp up production. Serum has also been subjected to export restrictions to help tide over a domestic shortage. Had the Modi administration put in large, confirmed orders with Serum - as well as with Pfizer Inc., Moderna Inc., and later, Johnson & Johnson - it could have held the blended price close to the originally negotiated 150 rupees apiece. Or at least closer than it would be now.

Finally, cutting corners on a subsidy that will cost less than 0.4% of gross domestic product could lead to output (and tax losses) many times higher. Daily fatalities are nearing 3,000 - and that's a gross underestimate. After the current spike has peaked, people will still need to be inoculated at a rapid pace to flatten the curve and avert a third buildup. And that's when the folly of charging $8 or $16 for a life-saving vaccine, in a country where the working class was struggling to buy  7-cent cookies even before the pandemic, may become clear.