When looking at the BJP's election victory in Tripura, one needs to be mindful of the fine print. In football terms, this is a big victory by a struggling team in a football league - against a team going through even worse form and facing relegation to a lower division. This is not quite a World Cup victory.

More than the BJP's victory, Tripura represented the CPI(M)'s defeat. The BJP did not grow organically in the state, with a grassroots organisation - like, for example, Trinamool Congress had grown in Bengal, through decades of struggle in the CPI(M) years. Rather, the BJP resorted to a marketing blitz to grab the advantage against 25 years of CPI(M) incumbency.

The BJP now believes Tripura will set the trend for other elections, from Karnataka this summer to the Lok Sabha in 2019 to Bengal in 2021 to... A few points need to be considered here. If the Tripura elections are a trend-setter, then what about other recent elections?

One can add Chhattisgarh to this swathe of contiguous states. Together, these four states have 75 seats. In 2014, the BJP won 71 of these. Extrapolating from the by-elections and other trends, quantitative and qualitative, one can safely conclude that the BJP is going to lose at least 50 of these 71 seats.

Now move to the east and south. In Odisha, the recent by-election saw a thumping victory for the BJD. The Congress vote collapsed in a seat the Congress had won in 2014. But the beneficiary was not the BJP - it was the BJD. People are looking for third-party (non-Congress, non-BJP) options, where these are available and viable. 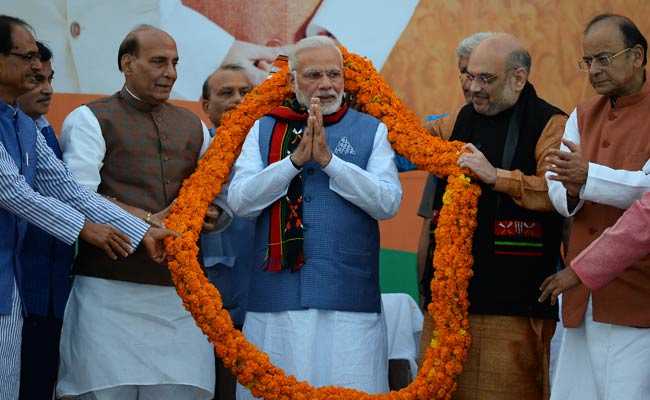 The BJP now believes Tripura will set the trend for other elections.

I travelled to Hyderabad recently and met a cross-section of people. In Telangana, the TRS is well-placed. In Andhra Pradesh, there is no hope for the BJP. It is only a matter of time before the Telugu Desam walks out of the NDA.

In Uttar Pradesh, where too the BJP won 71 seats in 2014 (73 with its allies), the party faces two big parliamentary by-elections. The current Chief Minister and his deputy won these seats in 2014 by over three lakh votes. This time the party could see its margins cut by half, maybe more. What lesson will we draw then?

Let us put things in perspective. Tripura is a beautiful state with friendly, hard-working people who deserve a better deal. It has 25 lakh voters. The smallest of Bengal's 23 districts is Howrah. It has 30 lakh voters. Tripura represents two seats in the Lok Sabha; there are 543 more in play.

Let the BJP propaganda not cloud analysis. The ruling party is eyeing the east - we are eyeing Lal Qila. On August 15, 2019, Narendra Modi will not address this nation from the ramparts of the Red Fort.

Before that, the second stage of the Budget session of parliament begins on Monday. The BJP still has to answer serious questions on jobs, the economy and on a certain namesake absconding in New York. Or is it Antwerp? Wherever it is, it's a long way from Agartala.

Promoted
Listen to the latest songs, only on JioSaavn.com
Derek O'Brien is leader, parliamentary party Trinamool Congress (RS), and Chief National spokesperson of the party.

Disclaimer: The opinions expressed within this article are the personal opinions of the author. The facts and opinions appearing in the article do not reflect the views of NDTV and NDTV does not assume any responsibility or liability for the same.
Comments
North East Election ResultsMamata BanerjeeTripura