The woman was rushed to the Buenos Aires Hospital, where she was told by the doctor that she is out of danger. 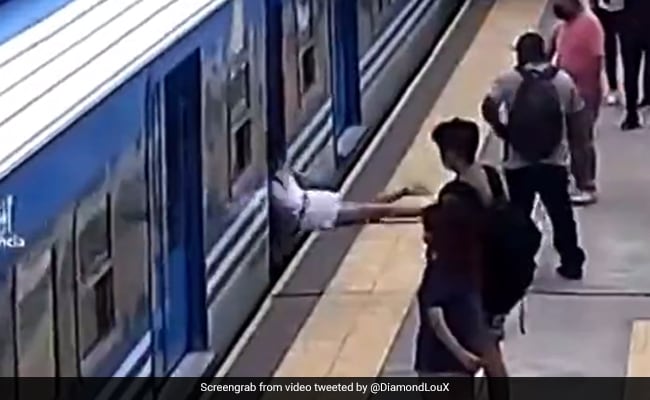 The woman miraculously survived the accident.

A woman miraculously survived after fainting and falling under a moving train in Argentina. She was pulled out safely by other passengers standing at the Independence Station in Buenos Aires, according to New York Post.

The incredible scenes captured on CCTV installed at the train station showed the woman - named only as Candela - stumbling on her feet before tipping forward and vanishing between two carriages.

So this happened recently in #BuenosAires#Argentina

This woman apparently fainted and she fell under on an oncoming train, BUT SHE SURVIVED! She's now out of the hospital ???? pic.twitter.com/EQA2V4foh9

The video showed Candela becoming unsteady and stumbling towards an incoming train after she passed out. The incident took place on March 29.

Commuters feared the worst and rushed to help the woman who came out unscathed.

“I don't know how I'm still alive. I'm still trying to make sense of it all,” she told an Argentinian television channel, as reported by the Post.

Candela further said she felt she had been reborn after surviving the accident.

“I suffered a sudden drop in blood pressure and fainted. I tried to warn the person in front of me but don't remember anything else, even the moment I smashed into the train,” she was quoted as saying by the television channel.

As other commuters crowded around, she sat and lied down on the platform before being taken away in a wheelchair to an ambulance.

Candela was rushed to the Buenos Aires Hospital, where she was told by the doctor that she is out of danger.

Last month, a man in Gujarat was saved after slipping between the platform and a moving train in Surat. The incident happened when the man was trying to get off the train.

In February, the personnel of the Central Industrial Security Force (CISF) saved a man who fell on the Metro train tracks in Delhi. A video clip of the incident showed the man walking on the platform engrossed in his phone and ending up on the tracks he lost his footing.