She handled the python like it was no big deal 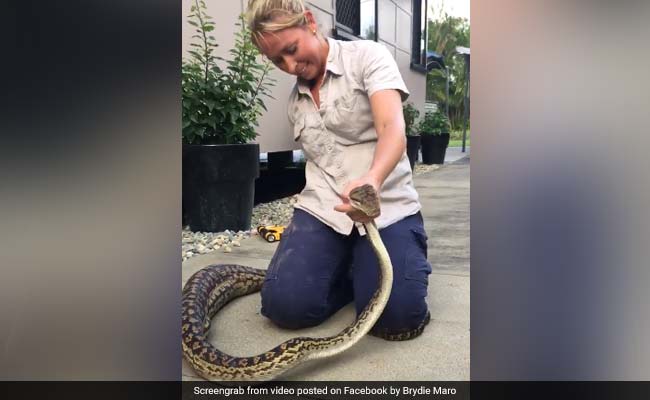 Brydie Maro's video showing her removing the snake is getting a lot of attention online.

Losing a pet is never easy. But losing your pet to a massive python that's now chosen to live under your house is far worse. That was the predicament one family in Australia found themselves in. Help came in the form of Brydie Maro, an electrician and wildlife conservationist with special skills in dealing with snakes. A video of her, casually removing the snake out of the family's home like it was no big deal, is getting a lot of attention online.

The video posted by Ms Maro on Facebook on March 5 shows her crawling under the house to retrieve the python. "My concern was that my face was level with the snake so I had to stay out of that strike zone," she told ABC News.

She is seen grabbing the python by its head seconds before the camera pans away. Moments later she emerges from under the house, enormous snake in tow. Once out, it's clear the snake is a female scrub python and that it had eaten a big meal - the family cat.

Ms Maro eventually put the snake in her tool box as she didn't have a bag big enough to contain the snake. She later released the python into the bushland.

"I just ask people not to kill or hurt them and if they don't like them in their property to get a professional to remove them in a humane manner. Most people who try to remove or kill a snake will get bitten, so it's about safety of human life too," she told ABC News.

The video makes for an incredible watch. Take a look:


On Facebook, people seem to be both impressed with Ms Maro and terrified by the snake she captured.

"Legend!! The confined space would scare me more than the snake!" says one Facebook user. "No way, that's insane bravery Brydie. My skin is still crawling," says another.Click for more trending news