Watch Video: Wife Upset After Man Recognises Mia Khalifa On Honeymoon. He Did This Then

A man recently bought his wife a Birkin bag on their honeymoon in Paris after he recognized Mila Khalifa in a hotel lobby. 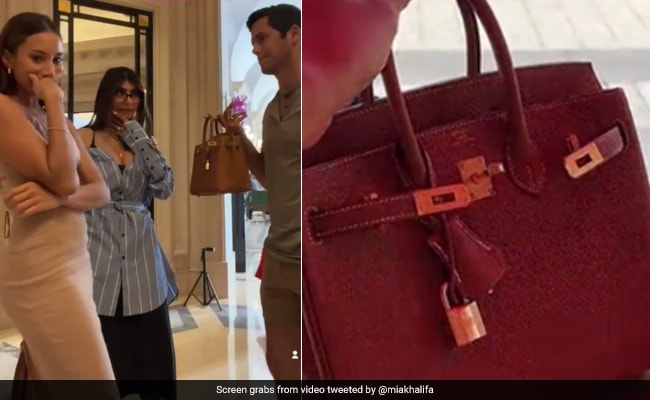 The price of premium brand handbags may range from Rs 7 lakh to Rs 10 lakh.

A man recently bought his wife a Birkin bag on their honeymoon in Paris after he recognized Mia Khalifa in a hotel lobby. The price of premium brand handbags may range from Rs 7 lakh to Rs 10 lakh.

A post shared by the star is gaining traction on internet where he showed how her mere presence helped a woman get a Birkin handbag.

Mia shared a screenshot of the video on Twitter on June 13, which was earlier posted on TikTok by the influencer and showed a Birkin bag in the image.

"This influencer staying at my hotel in Paris posted a TikTok feeling bad cause her man was excited to see me walk by at dinner last night, and this morning he bought her a birkin to make up for it. A *BIRKIN*," read the caption.

A video of the three people shared by Mia, was posted later which shows the woman screaming at her husband and him appearing with a Birkin bag as the celebrity is still standing by and reacts shockingly at the situation. "Y'all, we met," the caption said.

The video received over 5.9 lakh views on Twitter so far. Users felt amused with the video and posted funny remarks in the comment section.

"What a turn of events," wrote a user.

While the other took it personally and said, "Fortunately (not) it is very difficult to match like this because I would have to buy a whole store from my wife."

"He gave it to the wrong girl," a third user said.