4.8 million views for the video - and counting. 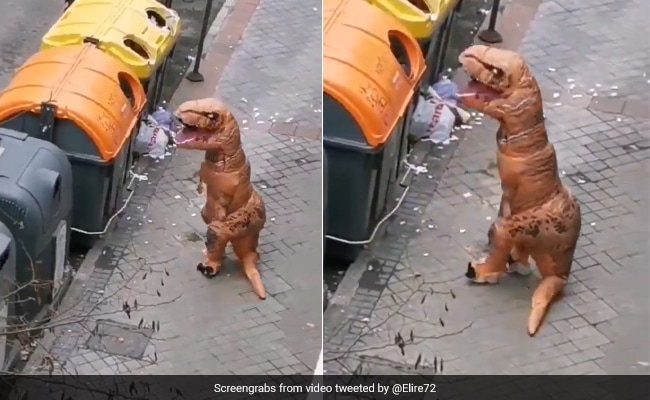 A man in Spain was filmed breaching lockdown dressed in a T-Rex costume.

Spain on Saturday imposed a nationwide lockdown for two weeks, urging citizens to stay at home to stop the spread of coronavirus in the country. But while patrolling the streets of Murcia in southeastern Spain two days ago, cops came across a man trying to breach the lockdown dressed in a dinosaur costume.

A video of the bizarre incident, shared by Murica Police on Twitter Tuesday, shows the man dressed in an orange tyrannosaurus rex costume waddling away to throw his trash in a dustbin on the street. The man was given a telling off by the police, who later shared the video on social media to urge citizens to stay at home.

"During state of alarm, walking of pets is allowed if accompanied by one person - always short walks so they can relieve themselves. Having a Tyrannosaurus rex is not covered. #stayathome," Murcia Police wrote while sharing the video, according to a translation provided by Newsweek.

Since being shared online two days ago, the video has gone viral on the microblogging platform, collecting more than 4.8 million views and hundreds of amused comments.

"This only happens in Spain!" wrote one person, responding to the video. "When your home town, city, country is in lockdown, it applies even to Tyrannosaurus rex," said another, while plenty more praised Murcia Police's choice of music - the theme tune to Jurassic Park.

One Twitter user even shared another video of the dinosaur.

Spain is the fourth worst-hit country in the world after China, Italy and Iran, with numbers rising rapidly despite an unprecedented national lockdown, with the government ordering its 46 million population to stay home.