Watch: Man Calmly Plays Golf As Alligator Approaches From Behind

A video is making the round on the internet that shows a golfer taking his shot while an alligator approaches from behind. 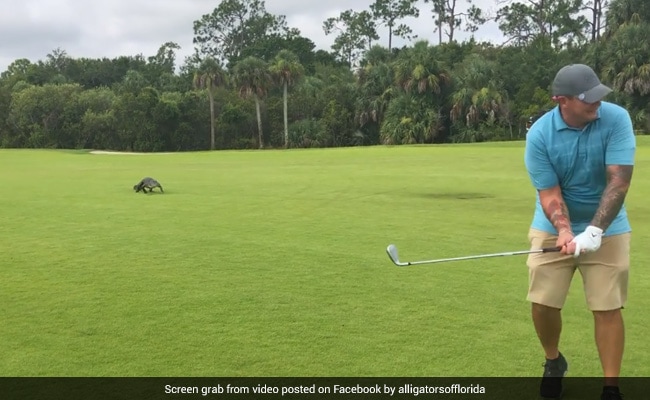 The man is seen taking a golf shot, while an alligator is seen approaching him slowly.

A video is making the round on the internet that shows a golfer taking his shot while an alligator approaches from behind.

The video was shared by a woman named Melissa Walsh on Facebook on June 27. Sharing the post she wrote, "The husband on the golf course. Naples, Florida. Michael West."

In the now viral video, the man identified as Michael West is seen taking a golf shot, while an alligator is seen approaching him slowly. But the man appears to be calm and totally focused on his shot. The video has been shot by his wife.

The 14-second clip has shocked social media users and received hundreds of likes.

"Not all gators are nuisance gators. Look at him waiting on your hubby to finish up. Thank you for posting this so people can see we can live in peace with these amazing beasties that so deserve our respect," wrote a user in the comment section.

"I love how the gator plops down after the dude swings," said another.

Several videos of alligators have gone viral on social media recently. One such clip showed the mayor of a small town in Mexico marrying an alligator in a colourful ceremony with traditional music playing and attendees dancing.

In the viral video, the mayor of San Pedro Huamelula town, Victor Hugo Sosa was even seen bending down to plant his lips on the small alligator's snout, which had been tied shut presumably to avoid unwanted biting.

The ritual marriage, like a prayer appealing for nature's abundance, presumably dates back centuries to pre-Hispanic times among Oaxaca state's Chontal and Huave indigenous populations.