The passengers on board the boat briefly taunt the sea lion by dangling the fish near it. 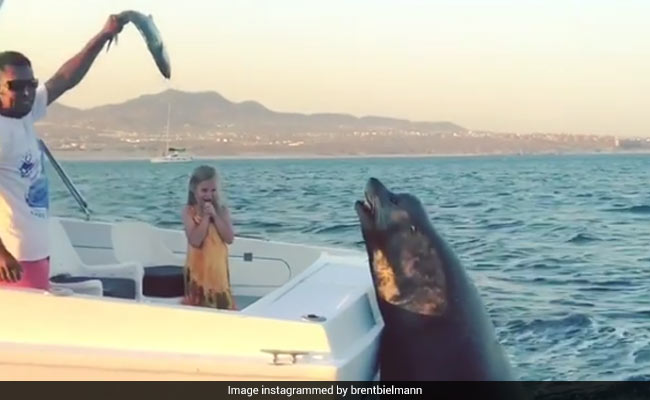 This massive sea lion was clearly hungry and looking for a bite to eat. And what he did to satiate himself has the Internet stunned. The enormous sea lion hopped onto the back of a fishing boat and waited till the people on board threw it a large fish to snack on. A person on a boat close by filmed the entire incident and posted a short video to Instagram.

Last week, surf photographer Brent Bielmann posted a video showing the sea lion riding on the back of the boat in Cabo San Lucas, Mexico politely waiting to be fed. "We caught this guy ridin dirty a few weeks back in Cabo! #biggie (sic)," he wrote in a caption accompanying the video.

In the clip, the large sea lion stares longingly at a fish a person on the boat is holding up in his hands. The entire time a little girl in a yellow dress looks on with a mixture of disbelief and excitement.

"It's huge," exclaims someone in the background. "This is a viral video."

The passengers on board seem to taunt the sea lion by dangling the fish near it before finally tossing it over.

The video has been viewed over 750,000 times and has thousands talking.

"That's Poncho! Cute but deadly. Don't let him fool you," writes one person on Instagram.

According to reports, a colony of sea lions live in the area. One seal in particular, dubbed Pancho by locals, often catches rides on boats returning from fishing trips, hoping for a quick snack.

"I don't know if this is hilarious or terrifying," writes another person on Instagram.

"Someone missed the video where the girl gets pulled into the water by a sea lion...this behaviour is going to get the sea lion killed or someone injured, maybe both. Not cute, sorry," comments one person angrily.

Last month, a viral video captured the terrifying moment a sea lion yanked a little girl into the water in Canada. A man immediately jumped in to rescue the girl. Neither were injured.