Alain Robert has been dubbed the French "Spiderman" for his exploits in climbing buildings around the world. 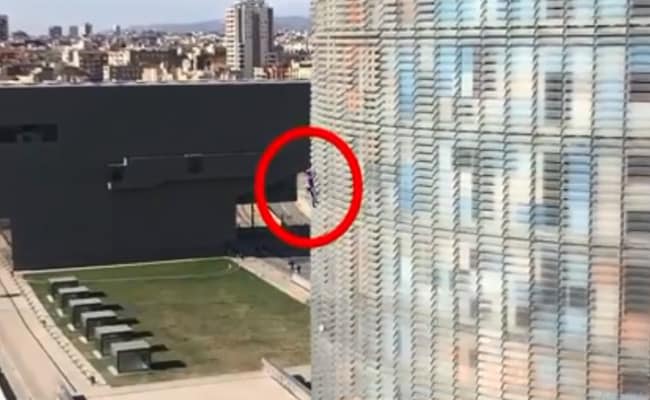 A daredevil French climber scaled one of the tallest skyscrapers in Barcelona without a harness on Thursday in what he said was a protest against panic over the deadly coronavirus epidemic.

Bystanders and police watched as Alain Robert, dubbed the French "Spiderman" for his exploits in climbing buildings around the world, climbed up and then descended the 145-metre (475 foot) Torre Agbar, a glass-covered office building known for its night-time illuminations, completing the feat in 47 minutes.

Police detained the 57-year-old when he reached the ground while onlookers applauded his feat.

"What is more contagious today is not the coronavirus, it is fear. There are probably some three billion people who are scared because of this disease, which after all, we can't control," he told AFP TV before starting his climb.

"There is a certain analogy between what I do, climbing without a rope, which can cause some fear. And the same happens with coronavirus. In my case, we can talk about a fear that is controlled, domesticated."

Robert is famous for his daredevil approach to scuttling up buildings with nothing more than some chalk on his hands and climbing shoes on his feet, often to promote a political message.

He has conquered more than 100 structures worldwide including Dubai's Burj Khalifa complex, the Eiffel Tower in Paris, Malaysia's iconic Petronas Twin Towers, and the Sydney Opera House without safety equipment.

Worldwide around 3,200 people have died from COVID-19, with more than 90,000 infections -- with China, South Korea, Italy, Iran and Japan the worst affected.