"And after the Gold rush for India at the #CWG2022, the next generation of talent is shaping up. Unsupported," Anand Mahindra wrote on Twitter. 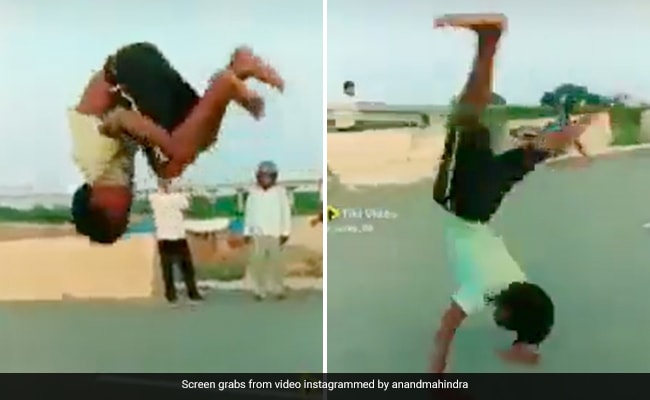 Industrialist Anand Mahindra often shares fascinating social media posts that pique the interest of internet users. This time too, he has caught netizens' attention by sharing a video displaying "the next generation of talent".

The short clip shows a young boy performing somersaults in the middle of a road. "We need to get this talent on the fast track," Mr Mahindra wrote in the caption of the post. He also added that the video was shared by one of his friends who saw the boy cartwheeling in a village near Tirunelveli, Tamil Nadu.

And after the Gold rush for India at the #CWG2022 the next generation of talent is shaping up. Unsupported. We need to get this talent on the fast track. (This video shared by a friend who has seen this boy in a village near Tirunelveli) pic.twitter.com/DXBcGQjMX0

"And after the Gold rush for India at the #CWG2022 the next generation of talent is shaping up. Unsupported," the industrialist said on social media.

Shared just a few hours ago, the video has already taken the internet by storm. It has accumulated more than 118,000 views and over 6,000 likes. While some netizens called the little boy the "future world gymnastic champion," others wrote, "Someone needs to help this boy get trained and be part of the Indian Olympics team. He has already learned the tricks".

The video left the internet amazed. One social media user said, "Wow Sir! The Mahindra family has contributed hugely in developing industries in India ! Time for a venture in developing sports?" Another simply added, "India Rocks.."

A third commented, "Future superstar," while a fourth said, "Just amazing.. India is filled with talent in all corners."

Mr Mahndra is an avid social media user. Last week, he also posted an image of a Lego store in Manhattan, New York. The industrialist was pretty amused by the fact that Taj Mahal Lego was out of stock whereas the White House set of toy blocks was full in stock.