Virender Sehwag posted a tweet dismissing global warming as something that's happening only in the US. 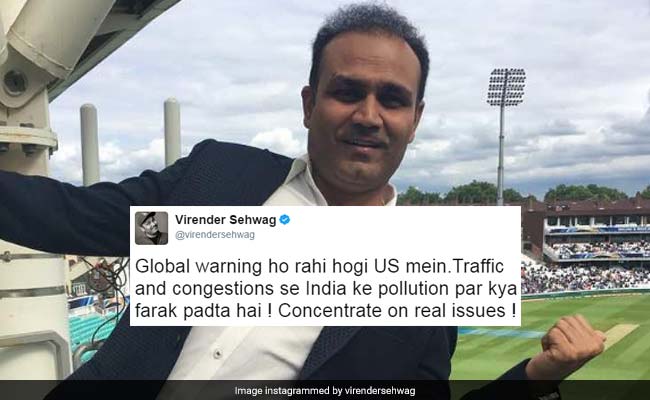 New Delhi: About two hours ago, cricketer Virender Sehwag posted a  tweet dismissing global warming as something that's happening only in the US. In the tweet, the former cricketer suggested traffic and congestion has no link to pollution and that people should concentrate on the real issues. He didn't specify what those real issues are.

The weirdly-worded message left people very confused, with some wondering whether he was being sarcastic in writing the tweet.

Many, however, slammed the cricketer for his views on global warming, in which he misspelled as 'warning'.

Global warming IS THE REAL ISSUE. Biggest threat to our Planet. In your school, hire qualified Science teachers who don't talk like you. Thx

You should be tweeting more responsibly when millions of people take your words for the truth.

Not sure what he means by real issues? Does he not know traffic=pollution=GHG emissions=#climatechange. But maybe this is not imp for him

Many asked him to clarify what he meant by 'real issues'

What are the real issues according to you sir??


And this one tweet summed up how most people felt

Can sm1 explain what he meant pic.twitter.com/6hbvKls3Bi


After the original tweet garnered a lot of reactions on social media, Virender Sehwag posted a video on Twitter with an explanation. In it, he revealed that his first tweet was part of a corporate campaign to raise awareness about traffic and pollution ahead of Environment Day.