A supercell is a thunderstorm with a deep persistent rotating updraft. Supercells are rare, but are responsible for most severe weather events. 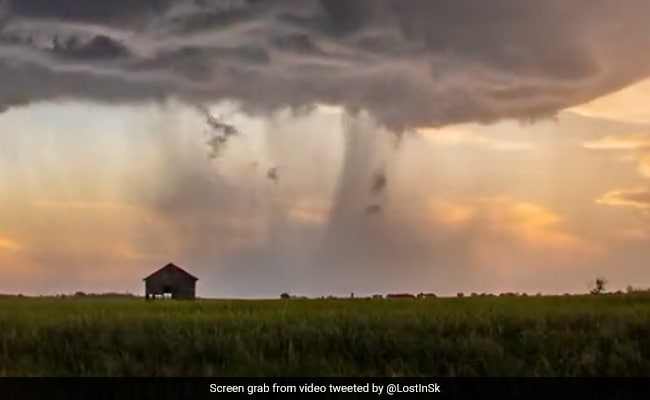 A timelapse video showing a large supercell thunderstorm dumping rain over farmland in southwest Saskatchewan, in Canada, is going viral on the internet. The video was caught on camera by storm chaser Jenny Hagan on Monday.

In her tweet, Ms Hagan said she captured the footage at sunset near the community of Cantuar which was under a thunderstorm warning at the time. The video has been provided by Storyful under agreement with Ms Hagan.

Sunset #skstorm are simply put the best. The lightning was flashing off frame unfortunately but man! Last night June 27 near Cantuar #Saskatchewanpic.twitter.com/icd2iRYVPK

A supercell is a thunderstorm with a deep persistent rotating updraft. Supercells are rare, but are responsible for most severe weather events - especially tornadoes.

The 24-second video posted by Ms Hagan has been viewed more than 34,000 times. It has stunned Twitter users, who praised the storm chaser.

"That is truly great work by you and Mother Nature," said a Twitter user. "Saskatchewan: Land of the living skies...!!!" said another.

Among the barrage of responses, one user posted: "That cloud is amazing. And a little creepy."

Photos of these natural phenomena often go viral on social media. A few days ago, a woman in the United States captured an incredible cloud formation that appeared to look like an ocean in the sky.

Theresa Birgin Lucus told KVRR that she was driving toward the town of Bemidji in Minnesota after a long week in Rochester when storm clouds began rolling in. She revealed that she snapped a photo of the road to show her daughter how far away she was from her home.

It was one of the quickest pictures she had ever taken and she didn't even look at it until she got home. But Ms Lucus' daughter saw it and said how cool it turned out. This is when she decided to upload the picture on social media, where it immediately went viral.