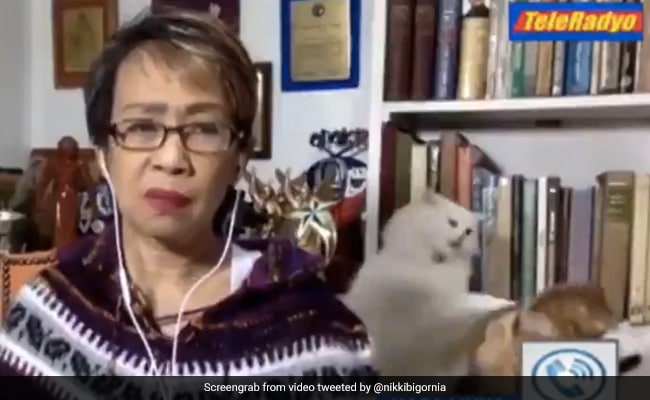 Doris Bigornia's interview was interrupted by a catfight.

Another day brings another 'working from home' gaffe that has left viewers in splits. This time, a video of a journalist trying to keep calm and carry on as her two cats fight viciously behind her on live TV has gone viral on social media, leaving many amused. A clip of Philippines journalist Doris Bigornia's ill-fated interview was shared on Twitter by her daughter, where it has collected over 2 million views.

Doris Bigornia was trying to interview a businesswoman for the Philippine chain DZMM when her two cats, Bella Luna and Nala, jumped at each other just behind her shoulder, reports the New Zealand Herald. Things quickly went south during the live broadcast for the reporter - who remarkably managed to keep her calm as the cats clawed each other furiously, with the bells on their collars adding to the commotion. She is seen glancing over her shoulder nervously as the cats tussled.

"My cats have no chill," wrote Nikki Bigornia while sharing the catfight video on Twitter. Take a look at the video below:

MY CATS HAVE NO CHILL ???????? @DorisBigorniapic.twitter.com/nJr3ZCedbG

Since being posted four days ago, footage of Bella Luna and Nala derailing the live interview has collected over 2.1 million views and 50,000 'likes', along with hundreds of amused comments.

"Omg a live TV catfight," wrote one person in the comments section.

"Even cats are starting to lose it after three months of quarantine life," another remarked.

This is not the first time that a pet has derailed a news report at a time when many journalists are working from their homes. Recently, a weatherman's attention-loving golden retriever gatecrashed his report in an adorable, viral video.

This New Mask Allows Diners To Eat Without Taking It Off