The video has prompted a flurry of reactions on Twitter 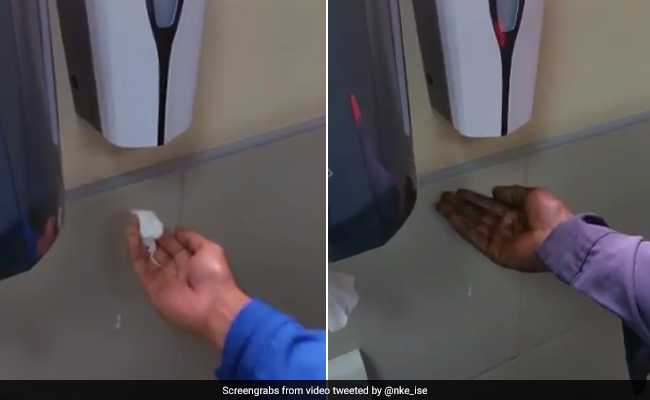 The video has collected over 2 lakh 'likes' and more than 1.4 lakh retweets so far.

An automatic soap dispenser has sparked a heated debate on Twitter after it was filmed dispensing soap to a light-skinned man but not to one with a darker skin tone. The video, posted by a Twitter user on August 16, has collected over 2 lakh 'likes' and more than 1.4 lakh retweets so far.

"If you have ever had a problem grasping the importance of diversity in tech and its impact on society, watch this video," Mr Afigbo says in the tweet accompanying his video.

If you have ever had a problem grasping the importance of diversity in tech and its impact on society, watch this video pic.twitter.com/ZJ1Je1C4NW

Back in 2015, a similar video sparked an outcry. The soap dispensers, filmed at a Marriott hotel in Atlanta, didn't seem to sense the hands of a dark-skinned man. "I tried all the soap dispensers in that restroom, there were maybe 10, and none of them worked," the narrator of the video, TJ Fitzpatrick, told Mic. Any time I went into that restroom, I had to have my friend get the soap for me."

Richard Whitney, VP of product at Particle, told Mic back in 2015 that such dispensers use infrared technology to dispense soap. When light from an infrared LED bulb reflects off of hands back to the sensor, the dispenser spurts out the soap. "If the reflective object actually absorbs that light instead, then the sensor will never trigger because not enough light gets to it," he told Mic.

The new video has prompted a flurry of reactions on Twitter. While some agree with Mr Afigbo, many others say flawed technology is to blame for this.

A simple problem in a sensor of machine can't be a society problem, the people are crazy?!

Maybe if the company that designed this employed a single dark skinned person they'd have found this problem earlier.

Looks like a lighting issue to me. An IR scanner doesnt "see" skin color. poorly lit bathroom fixtures dont work for me either sometimes

*face palm* not about the scanner; its about not having a coding staff diverse & thoughtful enough to have one that recognizes DARKER color

How does a faulty sensor in a machine compare to a palpable issue like diversity in Tech? Don't be naive please. This proves nothing

it happened with a face recognition software as well, some of these sensors don't pick up darker skin, poc at the company would help

Clearly the soap dispenser needs to come clean about its racist outlook in life.

So many people justifying this and showcasing just how deeply embedded racism is. Y'all think it's a *just* a tech prob. PEOPLE CREATE TECH.

I've always wondered about this. I see so many POC women in the restroom struggling with hand dryers

Do not look for racism where it is not ... it's all about the light sensor in the soap dispenser ...

diversity issues aside, how does someone with really dirty hands get soap to clean them with?