The species is a rare large-eared member of the dog family found in remote plains areas of central South America. 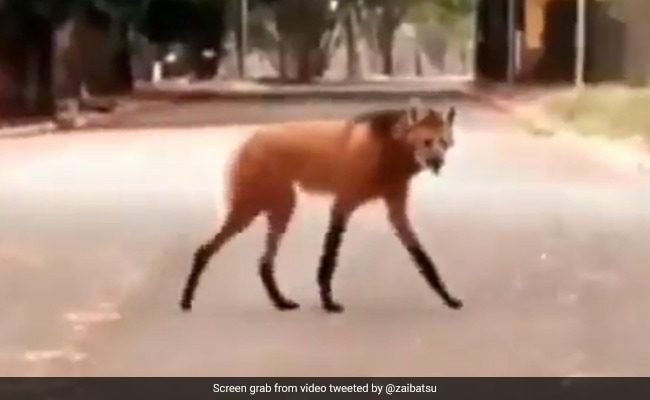 Many Twitter users were stunned to witness such an animal.

We are well aware of wolves. However, most of us might not have heard about 'maned wolf'. A video of one such creature, who is neither a fox nor a wolf has gone viral and the internet is too stunned.

In a video shared by internet user Reg Saddler on Twitter, the animal is seen crossing a street calmly. The weird part is that the animal appears to be a wolf at first glance and then if one looks closely, it appears to be a fox. However, it belongs to neither category. Amused by the same, the user captioned the post as, "Does anyone know what the heck this is?!"

Does anyone know what the heck this is?!
🎥 via Imgur pic.twitter.com/FwBBJCfgb6

The post has received two million views since being shared. Many Twitter users were stunned to witness such an animal. Some people thought that it's a hyena while others called the video fake.

One user said, "Looks fake, the dark fur on the neck keeps appearing and disappearing."

Someone took a guess and said, "It looks like a jackal hybrid with another canine mammal... maybe hyena or coyote."

The video was reshared by a Twitter page Fascinating where they claimed the animal to be a 'maned wolf.' As per Britannica, the species is a rare large-eared member of the dog family found in remote plains areas of central South America.

The maned wolf is characterised by an erectile mane, long reddish-brown fur, extremely long blackish legs, and a fox-like head. The maned wolf is a nocturnal, solitary species that preys on tiny animals, insects and plant matter. It often stays away from people.