The video has amassed 17.1 million views and 1.3 million likes. 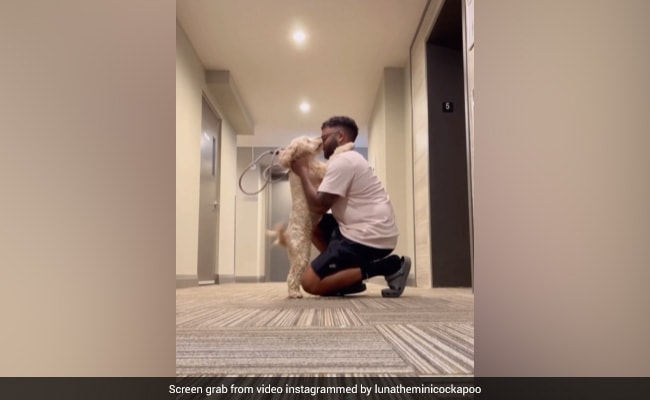 The dog hugs its owner.

Dogs are called man's best friend for a reason. These little creatures can brighten up anyone's gloomy day with their sweet gestures. Dogs perform the widest range of functions among all domesticated animals, including companion, helper, protector, and lifesaver to a human.

In an adorable video that is doing rounds on the internet, a dog is seen giving its owners a warm hug every time both of them leave the house. It's the canine's way of saying 'thank you'. In the beginning of the video, a man and a dog are seen heading out. As the man presses the elevator button, the dog jumps on him, as if wanting a hug. Later, the man sits down on one knee and hugs the dog. The moment is too cute to be missed. The text in the video reads, "My dog gives me a thank you hug every time we go out."

A post shared by Luna The Mini Cockapoo (@lunatheminicockapoo)

The video was shared on Instagram by Luna The Mini Cockapoo on June 23. Since then, it has amassed 17.1 million views and 1.3 million likes. The short clip has been captioned as, "Our souls are connected..."

One user commented, "Oh my heart! She is just TOO SWEET for words! She LOVES you!  Good fur Dad!"

"The way she looks at you!!," said another user.

"Dude chill.. I can't tear up every time .. beautiful dog. And beautiful relationship," commented a third.

A fourth user added, "My dog was like this too. I miss her so much."

"I'm in love with you, guys!" commented a fifth internet user.

"Inflation Is Real": Viral Video Shows Person Struggling Amid Rising Cost Of Living In US