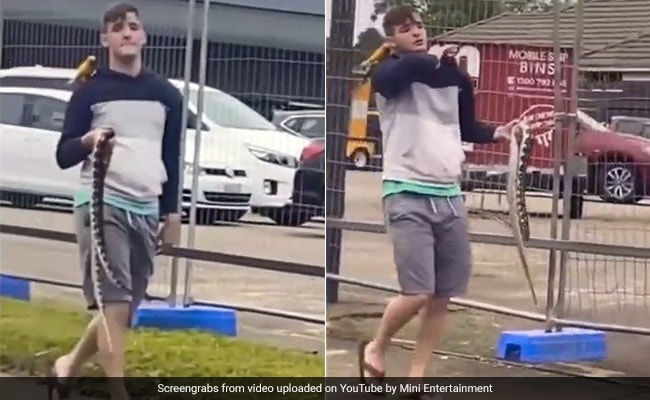 A viral video shows a man walking down the road with a parrot and a snake.

A video of a man walking casually down a street with a python in his hand and a parrot perched on his shoulder has left social media users amused and puzzled in equal measure. According to Unilad, TikTok user Hayley Roben was waiting at a traffic signal with some friends when she noticed the man sauntering down the road with his pets.

A video filmed and posted on TikTok by Ms Roben shows the man walking casually with a yellow parrot on his shoulder and a snake held nonchalantly in his hand. As she filmed the scene unfolding in front of her, Ms Roben's co-passengers were heard laughing in the video.

"Are you kidding me. Look at him, he's having the best time," one person was heard saying.

A few seconds into the video, the man transferred his python from one hand to the other before plopping it down on the ground at a pedestrian crossing to press a button. He then picked up the snake again and was seen playing on his phone as he waited to cross the road.

Although the video was first shared on TikTok, it quickly exploded on social media and has since been re-posted on other platforms as well.

According to the Daily Mail, the clip racked up over 40,000 'likes' on TikTok, where many criticised the treatment meted out to the python. "Though captive snakes can be very tame to handle they are prone to stress and deserve respect like any other animal," a snake handler from the Gold Coast Snake Catchers said.