The Telangana Police then reshared the video with an advisory. 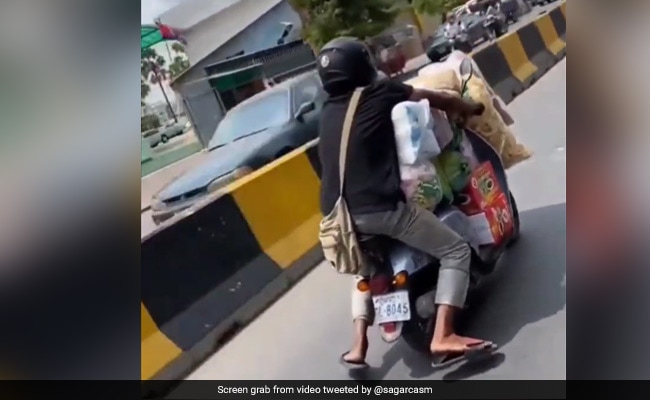 A young man's attempt to transport maximum goods on a two-wheeler at risk has caught the attention of social media users and the Telangana Police.

The clip was initially shared by Twitter user Sagar with a sarcastic remark, “My 32GB phone carrying 31.9 GB data”. The Telangana Police then reshared the video and wrote that one can retrieve data from a mobile phone even if it is damaged, but life is not so.

There is a possibility to retrieve the data from the Mobile, even if it's damaged.
But not life...
So our appeal to people avoid putting their life's at risk and others too.#FollowTrafficRules#RoadSafety@HYDTP@CYBTRAFFIC@Rachakonda_tfc@hydcitypolice@cyberabadpolicehttps://t.co/Z6cipHFfDr

In the short clip, a man is seen balancing a ton of stuff on his scooter. As he can barely sit on the two-wheeler, two bags are seen tied to the front of the scooter. Interestingly, the unidentified man was wearing a helmet while driving the vehicle, but his feet were nearly touching the road.

The young man was trying his best to transfer a maximum number of goods at once on his scooter. He had a ton of goods tied in front of him with two snacks fastened in the front as well.

Since being shared, the video has taken the internet by storm. While some internet users poked fun at the man and came up with hilarious reactions, others pointed out that it is a dangerous act. Netizens even sympathised with his struggle.

One user sarcastically wrote, “good guy following the Rules by wearing a helmet.” Another said, “The struggle behind the ride is heart-wrenching… be safe buddy.” A third added, “Please charge him with a huge penalty. Businessman understands money language perfectly. If penalised heavily, he will not forget till his death. Jokers taking law lightly.” "Inspired by Batmobile," jokingly wrote fourth.