As the bus stops besides the elephant, the jumbo puts his trunk straight through the window to look for food. 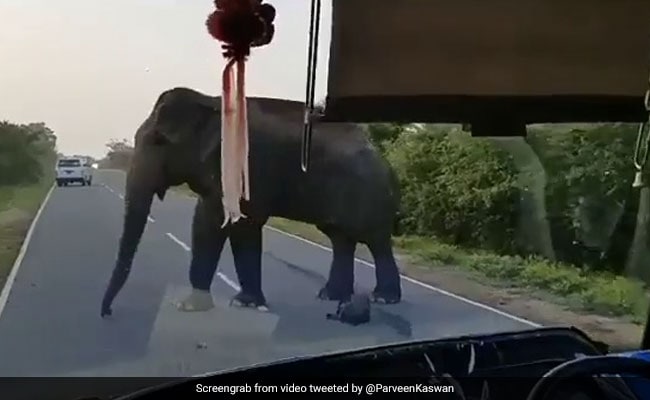 An elephant steals bananas in this viral video.

An old video that has resurfaced online shows the startling moment an elephant stopped a bus in the middle of a road to steal food. The brazen daylight robbery was captured on camera by a passenger inside the bus.

The hilarious footage, filmed in Katarangama, Sri Lanka, shows the bus driver slowing down on approaching the elephant as it stood in the middle of a road.

As the bus stops besides the elephant, the jumbo puts his trunk straight through the window to look for food. In the process of scrambling for bananas, he manages to clobber the driver with his huge trunk multiple times. Passengers in the bus can be heard laughing and exclaiming in shock as the animal scrambles for food.

Finally, he manages to get hold of a bunch of bananas. The driver speeds away as soon as the elephant gets his 'toll tax'.

The video was filmed in 2018. It began to go viral on Twitter after being posted by Indian Forest Service officer Parveen Kaswan.

"Daylight robbery on a highway. A forward," he wrote while sharing the clip. Watch it below:

Daylight robbery on a highway. A forward. pic.twitter.com/QqGfa90gF5

The video has been viewed more than 2.5 lakh times on the microblogging platform, collecting a ton of amused comments.

In the comments section, Mr Kaswan used the video as a cautionary tale to warn people against feeding wild animals.

"On a serious note this is why you see 'Do not feed wild animals' board near forest area. They become habitual of new taste. And keep coming to road & near human. This is not helpful to them in long run," he wrote, and then added: "Though possibly this is not related with this video."