The incident occurred at Goat Island Lodge, a remote establishment located on an island on the Adelaide River. 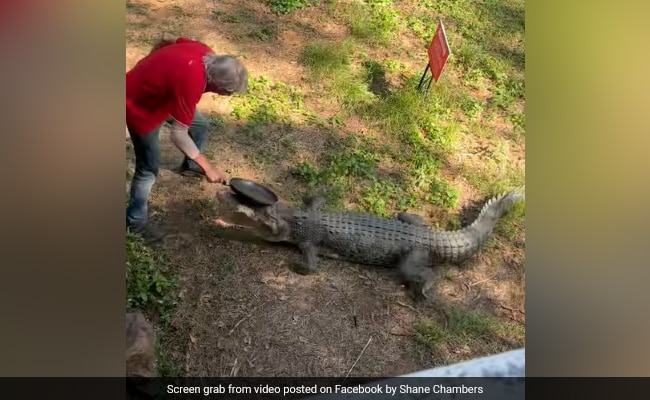 The clip has gone viral and has been viewed more than 2 million times.

An Australian pub owner has been captured on camera fighting off an angry crocodile with a frying pan.

The video provided by Storyful shows pub owner Kai Hansen face-to-face with a crocodile. The reptile appears to dash towards Mr Hansen, at which point he then uses a frying pan to hit it twice on the head. After the second strike, the crocodile is seen quickly turning away and retreating toward some bushes.

Since being shared, the clip has gone viral. It has been viewed more than 2 million times and has garnered more than 7,000 likes. In the comment section, one user jokingly wrote, “That gator turned so quick his head is probably still ringing.” Another said, “Not a frypan it's a crock pot.” some users were even critical of the drying pan incident. “I bet this guy gets fed and now the human wants him to go away,” said third.

Meanwhile, according to Newsweek, Mr Hansen and his crocodile encounters are well-known. He moved to the remote island several years ago despite the local crocodile population. Until 2018, he used to own a small dog as well called Pippa that would charge at crocodiles to scare them back into the water. However, one day the crocodile, known by Mr Hansen as Casey, caught the dog and killed her.