"This picture made my day," wrote one Twitter user. 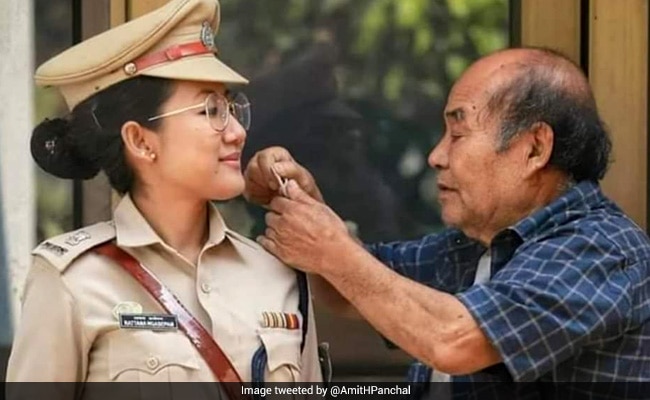 A proud father was photographed checking the stars on his cop daughter's uniform in a picture that has gone viral online. A photo of Manipur cop Rattana Ngaseppam with her father has warmed the hearts of thousands, earning much praise and appreciation on social media. While many praised the pride reflected in the father's eyes, others hailed the picture as an example of women empowerment.

In the picture, Deputy SP Rattana Ngaseppam from Imphal is seen smiling as her father looks at the stars on her uniform. She is seen dressed in uniform while her proud father checks her shoulder strap.

According to the Indian Express, the picture is a few months old and Ms Ngaseppam is currently additional SP with the Manipur Police.

"Rattana Ngaseppam, Deputy SP from Imphal, Manipur. Her proud dad checking out the stars on her uniform. And #Rattana proudly watching the stars in her father's eyes," wrote the Twitter user who posted the pic on Twitter Thursday.

Her proud dad checking out the stars on her uniform. And #Rattana proudly watching the stars in her father's eyes. [Source: @_mohul]

Since being posted online, the picture has collected over 15,000 'likes' and nearly 2,000 'retweets', along with a ton of reactions.

Actor Raveena Tandon was among those impressed by the photograph and the moment it captured.

Take a look at some of the other reactions that the pic has garnered:

This picture made my day #inspirational