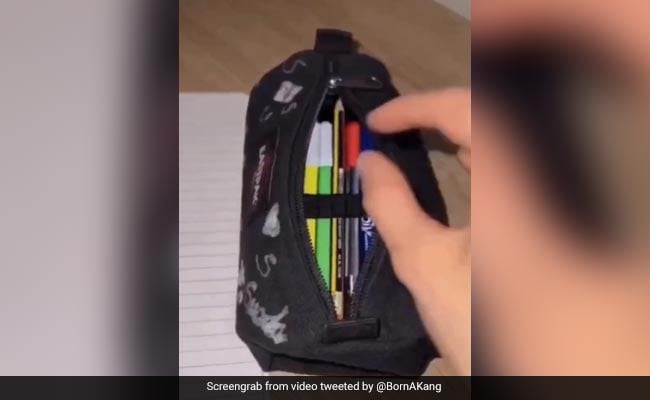 The video has garnered nearly 4 million views and over 101,000 likes.

A video showing a creative technique to cheat in tests is gaining traction on social media. The short clip was shared on Twitter by a user named Lance. "This is expert cheating," read the caption of the now-viral post.

In the short clip, a person is seen casually playing with a pen before the camera shifts to show a pencil pouch. A bunch of multi-coloured pens are then spotted inside the case. However, much to the viewer's surprise, the bunch of pens turn out to be the wallpaper of a cell phone, which the person was seemingly using to cheat.

This is expert level cheating pic.twitter.com/81es9GKzNF

In the clip, as soon as the person touches the screen of the phone, the picture of the pens changes and proceeds to show the phone's gallery which contains answers to the questions on the paper.

This trick has now grabbed netizens' eyeballs. In the comment section, internet users praised the technique and dropped hilarious responses. While some called it a "smart" trick, others called it an "expert-level cheating".

"Graduated with a 3.8 GPA and I cheated all 4 years all the time. You gotta be smart to cheat. It's almost as hard work as just putting in the work to not cheat," wrote one user. "Genius," said another.

A third commented, "Cool until they ask you to lend one of your colleagues a pen." A fourth jokingly added, "Wow it's easier to study than to come up with this creativity".

Since being shared, the video has garnered nearly 4 million views and over 101,000 likes.