The video has collected over 1.2 million views and counting 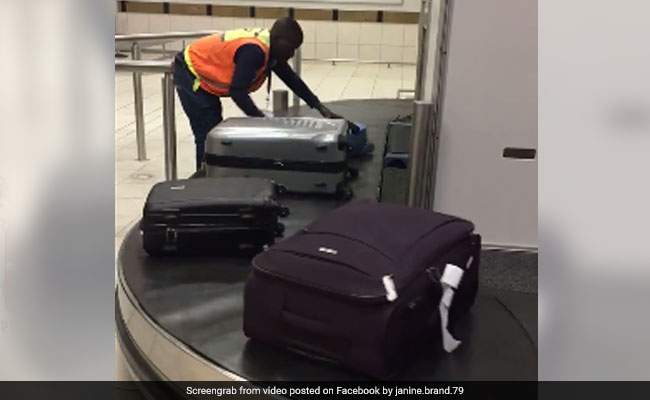 Ephraim Sibeko, who works at Lanseria International Airport in South Africa has won many hearts.

There are quite a few stories and videos circulating online that show how some baggage handlers at various airports mishandle people's luggage, throw them around or even open them up to remove things in some instances. However, a video that shows the complete opposite has gone viral all over social media. A video posted by Janine Brand on Facebook shows the airport handler going an extra mile and meticulously handling luggage at a conveyor belt. Since being posted on September 6, the video has collected over 1.2 million views and counting.

The video shows the airport worker, named Ephraim Sibeko, bending over a conveyor belt at Lanseria International Airport in South Africa and placing the bags in an orderly manner, even turning them over if the handle isn't facing outwards.

"If you have ever traveled in your life, I'll bet you 1000 bucks you've never seen anyone treat you or your luggage like Ephraim," Ms Brand says in the post shared along with the video. "He turns every single bag so that the handle of the suitcase is facing forward. All you do is grab and go," she adds.

She even asks everyone to "stop, thank and tip him" if you're ever at the airport.

Along with all the views, the video has collected 40,000 reactions, 23,000 shares and thousands of comments.

"Good job man, you deserve promotion," says one Facebook user. "This man deserved a MEDAL! Bless him," says another. "Wow! Great job. Please promote this man to teach others .Whilst at it, get him something to support his back," says a third.