A video shows three firemen working to rescue the man 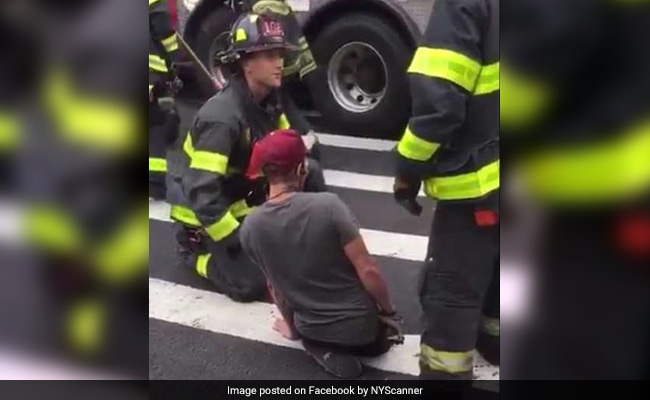 A man whose leg got trapped in a tiny sinkhole was rescued.

In a scary incident in New York, firefighters had to rescue a man after his right leg got trapped in a tiny sinkhole. The incident took place in Brooklyn at around 11 am on Tuesday morning, according to DNA Info. A video posted to Twitter by NYC Scanner, an unofficial Twitter account that covers NYC emergency services, shows firemen working to lift the man who was stuck thigh-deep in the tiny sinkhole.

According to DNA Info, a coworker of the man said that the accident occurred when a part of the road underneath his right foot collapsed and trapped him.

"From what I understand he was walking and the ground gave way. I ran over there and he was stuck in the ground, and the fire department was just arriving when I got there," said Joe Grunbaum of Kings County Autobody, Inc.

Watch the rescue video below:

SEE IT: Video footage of @FDNY Rescue a person after his foot got stuck in a Sinkhole in Brooklyn on Myrtle ave and Walworth St. pic.twitter.com/HeDNsboV4O

The man was later taken to the hospital.Click for more trending news