A video of the prank, that appears to have been filmed by an accomplice, has now gone viral on social media 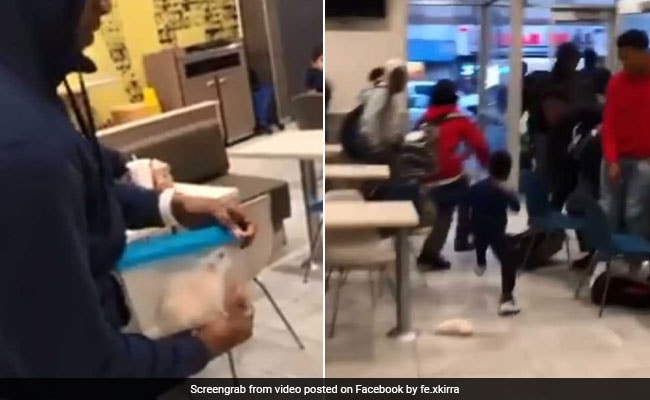 A viral video shows a rat being released inside a busy McDonald's outlet.

A man released a large, white rat into a McDonald's outlet in New Jersey last week, sending customers scrambling to get out and sparking chaos. A video of the prank, that appears to have been filmed by an accomplice, has now gone viral on social media. According to Fox News, police are now searching for the man who released the rat.

In the video, the unidentified man, along with a young child, enters a busy McDonald's outlet with the rat inside a pet carrier. The man then releases the rat on the floor, in the middle of the restaurant, and runs away as panic ensues. Screams can be heard as customers run toward the exit.

(Viewer discretion advised. Video contains language that may be unsuitable for children.)

Since being shared online, the video has gone viral with over 5,000 comments and more than 2.5 lakh views.

"This is so ridiculous," writes one person in the comments section. "What are you all finding sooo entertaining about an animal being scared... and people being scared??? Sick..." says another.

Soon after the video ended, "the rat exited the restaurant through the front door," a McDonald's spokeswoman told NJ.com.

This is definitely not the first time a small rodent has managed to create huge chaos. A hilarious video that went viral in 2017 showed what happened when a police officer came across a small rat.