Vadodara's New World Record Gets A Thumbs Up From PM Modi 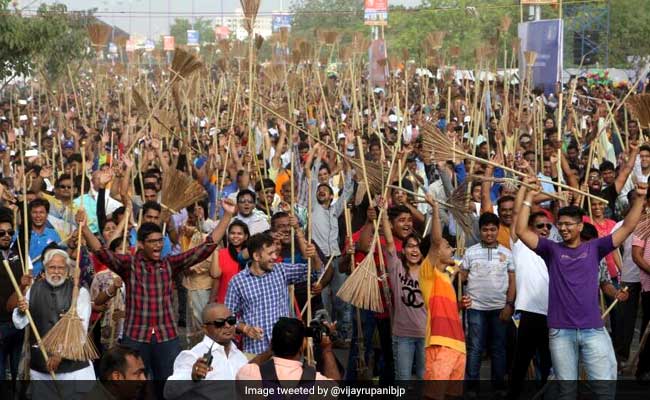 Participants swept the place in groups of 50 as 50,000 spectators cheered them on

New Delhi: Residents of Vadodara swept record books on Sunday. The city entered the Guinness Book of World Records for most people sweeping a single venue. According to Vadodara Municipal Corporation Commissioner Vinod Rao, 5,058 people came together to sweep the venue - a bridge connecting Akota with Dandia bazaar, spread over a kilometre. Armed with broomsticks, participants swept the place in groups of 50 as 50,000 spectators cheered them on in their attempt.

Vadodara was ranked the tenth cleanest city in the country under the Swachh Survekshan conducted by the Centre earlier this month. The event was organised to celebrate that achievement.

"This unique programme was organised for celebrating the city's inclusion in ten cleanest cities and as part of the commitment to become the cleanest city next year," said Vinod Rao.

The programme, according to officials, was a tribute to PM Narendra Modi's pet project 'Swachh Bharat Abhiyan'. Acknowledging the record, PM Modi tweeted that the record was "inspiring".

VMC has broken the Guinness World Record for the maximum number of people sweeping any public place. pic.twitter.com/EPLtghBdLE

Vadodara celebrated its inclusion in 10 cleanest cities in a very inspiring manner. pic.twitter.com/2C1B3LI9Fu

I see such spirit towards cleanliness across the nation. 125 crore Indians have come together to create a Swachh Bharat.

The Chief Minister of Gujarat Vijay Rupani also congratulated the residents on Twitter.

Highly inspiring to have Vadodara on Guinness world record with maximum number of people sweeping the 'floor' at a single venue. pic.twitter.com/iMPfg9Fpxo

This is a unique way and strong endorsement to take ahead the flame of cleanliness ignited by PM Shri @narendramodi .! Congratulations ! pic.twitter.com/VhYuEN8UnF

The mayor of Vadodara Bharat Dangar, who was present at the venue, proudly displayed the record on social media.

The previous world record was held by Surat when over 2,014 residents of the diamond city came together to sweep a street in the Udhana area.