The bride is an avid fisher and the giant black drum fish caught on her wedding night was "probably the biggest fish" she has ever caught. 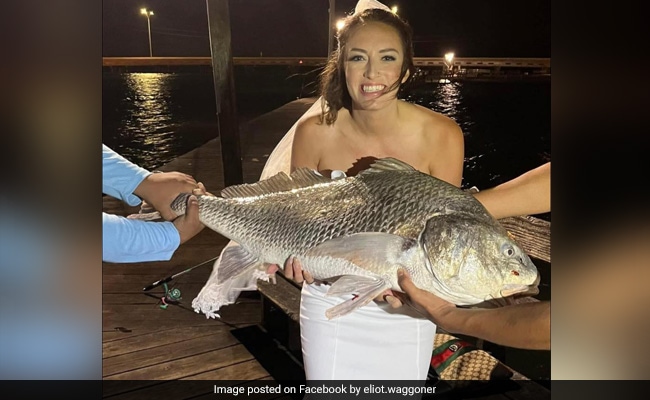 A 34-year-old US bride caught a giant 50 pound (23 kg) drum fish while still in her wedding dress. According to Newsweek, Eliot Waggoner Granville got married at a Chapel in Texas on Sunday, following which the newlywed couple decided to go fishing near the beach.

Still wearing her wedding dress and veil, Ms Eliot cast a line off Red Dot Pier in Corpus Christi. After spending 45-minutes, the bride felt something bite her fishing line. "Caught this bad boy on my wedding night," the bride captioned the Facebook post.

The 34-year-old reportedly said that she had not been using big bites, so she did not think the fish would be very big at first. "But then I started reeling him in and he started fighting with me and it took like 10 to 15 minutes for me to get him to the pier,” Ms Eliot said.

As per Newsweek,  the bride further went on to say that once she realised that the fish was much larger than she thought, she used a net to lift the fish's head out of the water and haul it into the pier. Ms Eliot estimated that the black drum fish weighed around 40 to 50 pounds (18-23 kgs).

After taking a few photos, the bride then released the fish back into the harbour. Ms Eliot revealed that she is an avid fisher and the giant black drum fish caught on her wedding night was “probably the biggest fish” she has ever caught. She said that her arms were sore after lifting the fish up for the photo.

Further, the 34-year-old went on to say that she goes fishing to feel closer to her father, who passed away last year. “Other people had been there for a long time and didn't catch anything, so I feel like it was dad watching over me and sending me a little — or big — wedding gift,” Ms Eliot said.

Meanwhile, it is to mention that as per the media outlet, the black drum fish are native to Texas waters and live in clear water in sand flats. They prefer shallow water and are often spotted as their large bodies can be seen poking out the surface of the water. As per Texas Parks and Wildlife, the largest black drum on record weighed 146 pounds (around 66 kgs).