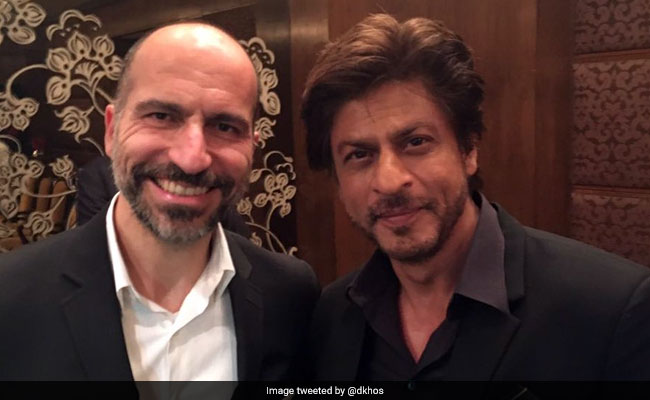 You could be a world leader, a business tycoon or anything in between, but your visit to India won't be complete without a meeting with the 'Badshah of Bollywood'. Shah Rukh Khan met with another high-flying guest just days after his meeting with Canadian Prime Minister Justin Trudeau. This time, it was Uber CEO Dara Khosrowshahi during his two-day visit to India. Yesterday, Mr Khosrowshahi took to Twitter to share a picture with King Khan.

"This is the part where the fancy CEO tries to look cool by posing with Bollywood superstar @iamsrk, the King Khan himself," he captioned the picture.

This is the part where the the fancy CEO tries to look cool by posing with Bollywood superstar @iamsrk, the King Khan himself. Note to self: gotta work on my haircut ... pic.twitter.com/K8eliu0aa9

In reply, Shah Rukh Khan tweeted Mr Khosrowshahi was "cooler than the 'King'."

You are cooler than the 'King' my man. Great to meet you. https://t.co/qheyrOrL5G

The meeting between the superstar and the CEO has left many starry-eyed:

Two of my favorite people in one place!

Cool photo in which a lot of positive energy. Thank You.

What a cool tweet Dara! Saving this to showcase CEOs and stars can act like nornal beings too like your haircut the way it is an #uber#loyalist

During his trip, which ended on February 23, Mr Khosrowshahi shared many pictures on Twitter as he met with Arun Jaitley, Uber employees and the students of IIT Delhi.

Excellent interaction with Finance Minister @arunjaitley on how Uber can offer customised mobility solutions for India. Loved his energy and passion for progressive reforms and digital payments. pic.twitter.com/oomDXXmONa

Spent the morning meeting with a group of our drivers - great to hear about their experiences with Uber and get feedback on safety, support and much more. pic.twitter.com/GSzwXb0Q37

My first selfie in India! Great to spend the afternoon with @ShereenBhan talking tech and culture with the incredibly bright young minds at IIT Delhi. #wearehiringpic.twitter.com/UyeWK9sS4p