"An image I keep in my folder," wrote Anand Mahindra 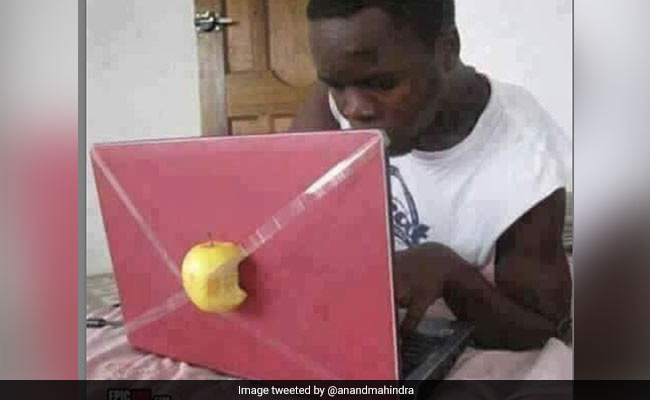 Businessman Anand Mahindra is an active Twitter user who often shares motivational posts with his 8 million followers on the microblogging platform. This morning, he took to Twitter to share a photograph that he keeps in his folder because it reminds him of an important life lesson. Mr Mahindra, 65, shared a picture that shows a man using a laptop with an apple taped to it. The fruit, which has a bite taken out of it, is clearly meant to resemble the logo of one of the world's most valuable brands - Apple.

Anand Mahindra, Chairman of Mahindra Group, said that the image reminds him of "what a brand should aspire to become". For him, the image also served another purpose.

Since being posted on Twitter, the picture has collected over 3,600 'likes' and hundreds of comments.

This is not the only picture shared by Mr Mahindra that has captured Twitter's attention. On Saturday, he also took to the microblogging platform to post an image that left many in splits. The picture shows a drainage outlet constructed on a raised platform - effectively defeating its purpose. If you need a laugh to start your week, look no further than this pic and the caption accompanying it.

"I have enormous faith in the inherent tendency of people to be practical. And sometimes I give up all hope of that," wrote Anand Mahindra while sharing the picture.

I have enormous faith in the inherent tendency of people to be practical. And sometimes I give up all hope of that... pic.twitter.com/nFBOfrwjm5

The hilarious image was also shared by IPS officer Dipanshu Kabra. "Do you find your life difficult?" he wrote in Hindi while posting it. "Think about the daily struggles of the people living in this house."

What do you think of the two pics? Let us know using the comments section.