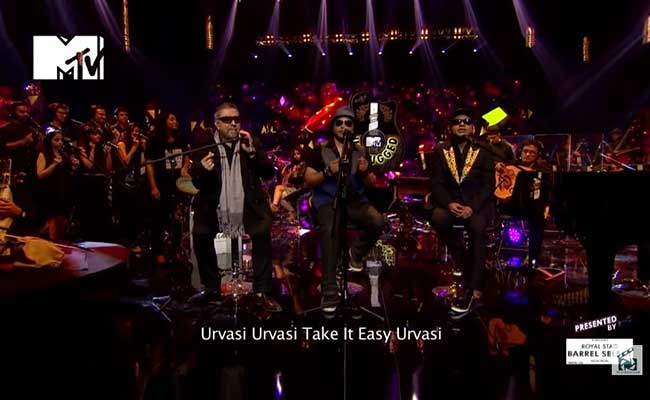 This Urvasi Urvasi by A R Rahman should pretty much be declared the anthem for 2017.

Noses were wrinkled at A R Rahman's Badshah-assisted remix of his nineties hit Humma Humma for new film OK Jaanu but his brand new version of Urvasi Urvasi is an instant hit. The Oscar-winner has recreated his old track from the 1994 film Kadhalan for MTV Unplugged, a series that shows musical artists performing to acoustic instruments. And this Urvasi Urvasi should pretty much be declared the anthem for 2017. The song's lyrics, like earlier, encourage everyone to adopt a 'take it easy policy' but with relevance to current affairs - Donald Trump's presidency, for one, and even the currency ban. What's more interesting is that the lyrics for the track have been crowd-sourced from social media.

The song, shared on YouTube and also retweeted by Rahman some 15 hours ago, is making waves online, what with the lyrics being so catchy. Even though the song is in Tamil, it's not hard to figure out some of these interesting lines (psst... some of the translations are available on the YouTube description of the song).

On December 1, Rahman posted on Facebook appealing to followers for lyric suggestions. "Of course please do leave out and avoid any reference to Hillary Clinton, Donald Trump or the currency situation for now," he had said.


We're not sure if he already had these lines planned or if people just didn't listen, but these references ultimately made it to the song.

While the song on Twitter has collected some 2,700 retweets and over 1,400 'likes,' on YouTube it has received almost 65,000 views and very much counting.

Promoted
Listen to the latest songs, only on JioSaavn.com
So grab those earphones and listen to the song now:

Remember when @arrahman crowdsourced new lyrics from YOU for a reimagined version of Urvasi Urvasi?

Well, HERE IT IS! And it's GENIUS. pic.twitter.com/k7xqLYemyI

What do you think of the track? How does it compare to the older versions? Tell us using the comments section below.