This Is What Downing Street Will Look Like If.... 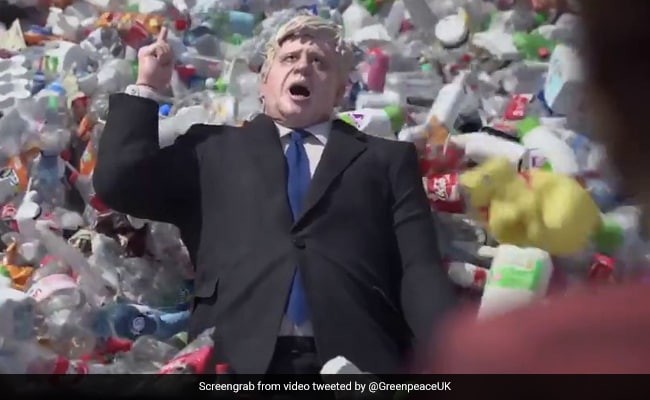 The UK is the world's second-biggest producer of plastic waste per person, behind only the US, environment organisation Greenpeace said, releasing a video criticising the government's policy on plastic waste. And because the country is producing so much plastic, the British government is dumping it on other countries, causing a health emergency for local people, killing wildlife, and polluting the oceans, Greenpeace said. To force the Boris Johnson government to change its plastic policy, the non-governmental environmental organisation has released a campaign video titled, ‘Wasteminster: A Downing Street Disaster'.

The two-minute animated video shows UK Prime Minister Boris Johnson giving a speech to the press outside his 10, Downing Street office, where he talks about being a “global leader in tackling plastic pollution”. Within seconds, a plastic rain begins to pour on him, and before anyone realises, it drowns him and all the other people present there.

The plastic flood is even shown even entering the government office buildings. Finally, we get to see a bird's eye view of the plastic waste accumulating in the area, the height of which gets even taller than the tallest building there. The video ends with the message, “This is the actual amount of plastic waste the UK dumps on other countries every single day.”

On Twitter, the video has received widespread support, with more than 13,000 likes and over 10,000 retweets. It has got more than 2.9 million views.

What a great campaign video.

Excellent video and a powerful message. We also need to be putting pressure on producers of single use plastic, and supermarkets to stop stocking those products. If consumers stopped buying them, they'd be forced to change their production methods.

CO2 emissions from incineration of waste exceeded emissions from diesel cars in 2016. So recycling as the UK Govt does it, is polluting the atmosphere.

As usual #Conservatives shifting the problem and the blame elsewhere while the production of single use plastic carries on with no penalties to the producers. Friends of theirs? Meanwhile it seems councils tick boxes for recycling with no interest in what happens next. Aaargh

On the amount of plastic that the UK dumps on other countries every single day, Greenpeace said it was around 1.8 million (18 lakh) kilograms. “We have all lived through a health emergency over the past year in the form of COVID-19. But by dumping our plastic waste on other countries, the government has been fuelling another health emergency for even longer,” the NGO said.