Up for auction are bookshelves, a pocket watch, a chef's jacket, a bed, a Kenneth Cole distressed leather jacket, cookbooks, chef memoirs and more 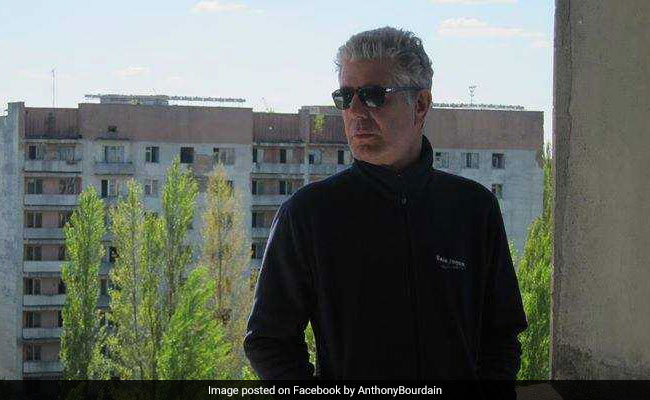 Anthony Bourdain's possessions will be up for auction.

Anthony Bourdain was not a pack rat or a collector. His Manhattan apartment was not a museum dedicated to souvenirs gathered over the years when he served as host of "Parts Unknown" and "No Reservations." His belongings were largely functional or decorative or educational. Few were items that you would immediately identify as keepsakes or mementos from his travels around the world.

That, at least, is one conclusion you could draw after reviewing the items from Bourdain's personal collection, which goes up for auction on Wednesday. The lot of more than 200 possessions includes bookshelves, a pocket watch, a chef's jacket, a cherry-wood sleigh bed, many pairs of sunglasses, a Kenneth Cole distressed leather jacket, a Tom Ford pinstripe suit, a cashmere coat, designer neckties, cookbooks, chef memoirs, art books, a Pottery Barn table with chairs and a filing cabinet with a top drawer that won't open.

"I wouldn't define him as a collector, someone who spends a lot of time and effort to get every issue of a comic book," said Laurie Woolever, co-author of Bourdain's "Appetites: A Cookbook" who for nearly a decade served as his assistant and gatekeeper. "It was more the things that interested him."

But it's important to remember, Woolever added, that the auction items came from Bourdain's small apartment, which he occupied from 2016 until his death in 2018. Woolever helped Bourdain pull his apartment together after he separated from his wife, Ottavia Busia, in 2016. Aside from the more functional pieces, like a desk or bed, the space was outfitted with the artwork, mementos or reading materials that were "particularly meaningful to him," Woolever said.

The true value of the possessions is hard to pin down with any precision. If you add up the lowest estimates on iGavel, the site where bidding will take place, the lots are worth around $54,200, based on appraisals by Lark Mason Associates, the auction house handling the sale. But the estimates, noted Woolever, are based on the market value of the possessions, not on any sentimental value that a buyer may attach to stuff once owned by Bourdain, a man whose fame reached around the world.

"I guess the value will be determined as the auction goes on," Woolever said. The auction ends Oct. 30.

Among the high-value lots is a custom-made Bob Kramer steel-and-meteorite chef's knife. It's worth between $4,000 and $6,000, according to the auction site. Woolever said the blade is one of the more sought-after items. The "knife has the clearest through line to Tony being a former chef," she said.

There's also a Patek Philippe Calatrava 18-karat gold watch, with an estimated value between $5,000 and $8,000. Paintings by John Lurie, Duncan Hannah and Brad Phillips are expected to fetch thousands of dollars, too. But the more interesting lots may be those with little value on the free market but potentially tons of value to Bourdain fans: items such as Bourdain's chef's jacket, a stash of records, a Zippo lighter engraved with "No Reputations. Desert Special 2011," a customized U.S. Navy jacket from the USS Nashville (whose crew helped evacuate Bourdain and his team when they were caught in the middle of a battle in Beirut), four of Bourdain's college-era stories, a collection of Bourdain's comic books and many other personal belongings.

Some pieces have a history, and value, that may not be immediately grasped, such as the framed photo from pop star Billy Joel. During his time as a chef, Bourdain reportedly had a "no Billy Joel rule" on the sound system in his kitchens. Cooks who violated the rule could be fired on the spot. But that didn't stop Joel from sending Bourdain a small gift: a framed photo, along with a note that read, in part, "So much for your rule - 'No Billy Joel in my kitchen.' . . . By the way, I don't like the Grateful Dead either. Love, Billy Joel."

Then there's the writing desk. Its estimated value tops out at $1,200. But for the auction program and marketing materials, Woolever wrote a paragraph that may inspire bidders to fight over the piece:

"As Bourdain spent so much time on the road, in hotels, airports, remote desert and jungle camps and the like, the comfort and beauty of his home was paramount. His home furnishings reflected a sense of nostalgia for the mid-century modern aesthetic of his 1950s and '60s childhood, as well as his abiding love for the design sense employed by the Chateau Marmont, one of his favorite hotels, in West Hollywood. As such, the Peter Lovig Nielsen teak flip-top desk was the centerpiece of his home office. With its sleek but capacious design, it was the ideal hub for a writer who'd seen the world and wanted to tell you about it."

Sixty percent of the auction's proceeds will go to Busia and the couple's daughter, Ariane. The remainder will fund the Anthony Bourdain Legacy Scholarship at the Culinary Institute of America, from which Bourdain graduated in 1978. The scholarship will assist CIA students who participate in one of the school's international or semester abroad programs. The school expects to award three Bourdain scholarships each year.

For Woolever, working on the auction has been a bittersweet experience. She hasn't seen many of these objects since she worked with Bourdain. She said her boss had no misty-eyed notions about what happens after death. She thought he would be "indifferent or supportive" of the auction.

"The fact that it's benefiting a new generation of students at the CIA is somewhat comforting," Woolever added.

Bourdain's longtime assistant said she has little interest in bidding on an item. Turns out, she's not much of a collector, either. She already has plenty of keepsakes from her time with Bourdain: They're stored in memory.

"I'm pretty well steeped in him," Woolever said. "An object to me doesn't have much appeal."