Social media have been filled with threads that are both heartbreaking in despair and heartwarming in humanity. 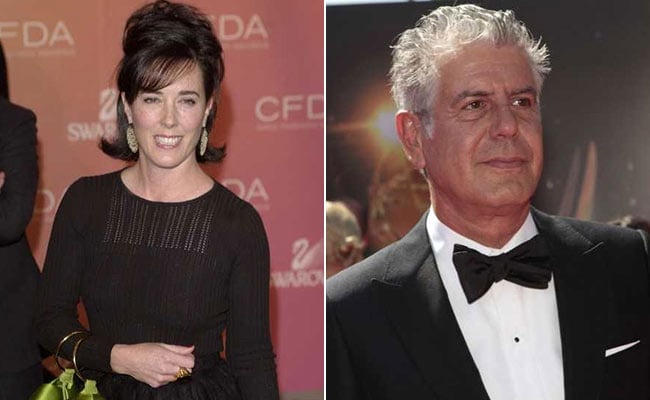 The suicides of Anthony Bourdain and Kate Spade last week stunned and saddened the world - and left millions of fans who felt they knew them from afar asking "Why?"

But for one large group of people, there was less shock and more understanding: The survivors.

Survivors took to social media in the aftermath to tell their own harrowing stories. What was striking was how many of them recounted how they made it through. It was often a friend, or even a stranger, showing kindness, telling them they matter and to stick around for a while.

And that was enough, in those desperate moments, to pull them back from the edge - sometimes literally. Or explain how in the darkest days after the suicide of a parent, when shame and horror seemed overwhelming, these survivors kept going. Both Bourdain and Spade had children.

Social media have been filled with threads that are both heartbreaking in despair and heartwarming in humanity. The commonality is that gestures small and large matter. Here are a few of them:

Josh Raby, a Tennessee-based director and writer, started his thread: "It's been 6 years since I was barefoot on the railing of a bridge, in the rain, literally holding on by a pinky, just hoping I'd slip. I had beautiful kids. A loving family. Friends. A good job, great money. And here's the damn fool truth of it:"

What followed is a stunning tale of how he ended up at his house, still planning to kill himself, when he looked outside and saw his friend wearing part of a Buzz Lightyear costume he was building. Raby went out to see what was going on and then confessed to his buddy what he was planning. His friend hugged him and said: "Don't go home. Stay here today."

He tweeted: "The point is, all these lies I told myself: I'm a burden, I'm alone, I've no future without this struggle, my brain'll get me eventually. . . if a hug and a Buzz Lightyear costume were enough to be bigger than them, even for a day, then the lies weren't as powerful as I thought."

Raby, whose stepfather died by suicide a year after Raby's close call, said in an interview that he's been open in the past about his suicide attempt. But he decided to share additional details about it over the weekend, because when high-profile people take their own lives, it "frees people up to be more vulnerable."

"The reason I tell these things is not confessional it's more communal," he said. "There is nobody I know in my personal life who has not interacted with suicide on some level."

People responded to him with their own stories of being on the brink of suicide. He said he's gotten hundreds of responses and personal messages.

Writer and film critic Sheila O'Malley wrote on Twitter about how after her father died she was essentially immobilized in her new apartment, and a friend took a big risk to help her. It paid off.

Her thread starts: "The year after my dad died was so bad I don't remember 90% of it. I moved to a new apt and was unable to unpack. For MONTHS. I was ashamed I couldn't unpack. How can you be UNABLE to unpack? Just open the g.d. boxes. That was the year I cried for 19 days. Straight.

"My good friend David - whom I've known since high school - knew I was struggling and he felt helpless. He said "you are loved" "we need you". I was like, "Doesn't matter, but thanks." So he took a risk. It very well could have ended badly. I could have lashed out. /2"

Her friends came to her apartment without asking and spent hours unpacking her boxes and hanging her pictures. She briefly tried to stop them, then realized how deeply she needed them.

"I could have been really REALLY offended. But he took the risk. He sent out an email to a group of local friends (w/out my knowledge) and said, 'Sheila is struggling. She needs our help. Let's all go over there and unpack her apartment for her. Bring food. Let's make it fun.' /3

"I was overwhelmed at the sight of all of my crazy friends turning themselves into Santa's workshop. On my behalf. W/out asking me. They just showed up and barged in. I was embarrassed for like 10 minutes but they were all so practical and bossy I had no choice but to let that go."

She ended with this: "To reiterate: This plan could have backfired. I very well could have been offended, insulted, hurt. David took that risk. Being a friend takes commitment. A willingness to take that risk."

Another Twitter user, Bryan Behar, a TV writer, started his post: "Tuesday was the 10th anniversary of my father's suicide. I assumed it would pass quietly with not much feeling. Couldn't have anticipated the passings of Kate Spade & Anthony Bourdain. Now my feed is filled w talk of suicide & depression. People talking about is always good"

The day after he wrote the thread, he came back to point out that even Twitter, often known for nastiness, can be a place where people look out for one another.

Promoted
Listen to the latest songs, only on JioSaavn.com
"People often slag social media. But look at this thread. It's people offering a relative stranger decency & kindness & compassion. I know Twitter has its downsides, but look at this collective outpouring of good."