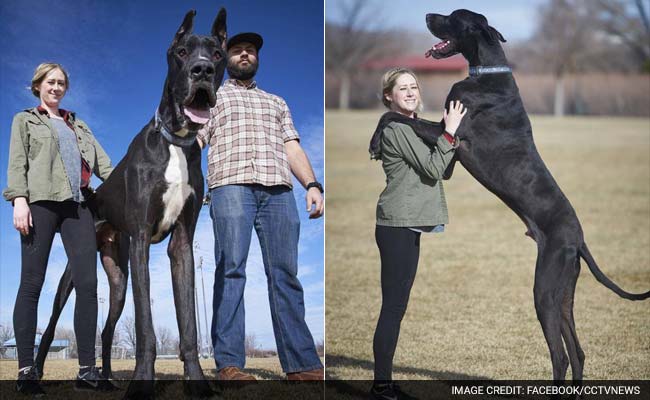 Say hello to Rocko, a Great Dane hoping to set the Guinness World Record as the tallest dog in the world.

Only two-years-old, Rocko is already 7-feet-tall and weighs about 167-pounds, according to reports.
"We had no idea he was going to be this freakishly large," says Jessica Williams, Rocko's human, on the CCTVNews Facebook page. She and her boyfriend Nick Helms got Rocko when he was eight-weeks-old but already the size of a six-month-old Labrador, reports Daily Mail.

The 'giant pet' hasn't stopped growing since. He can eat up to about eight cups of dog food a day and enjoys snacks like jerky.

While the couple dote on Rocko, they admit there are difficulties in living with such a huge dog in their small two bedroom apartment in Nevada. Jessica, all of five feet three inches tall, gets knocked around by Rocko often and was left with a black eye when the hound head-butted her, reports Daily Mail.

"'The worst part is little kids," Jessica told Daily Mail. "People are crossing the road to avoid us; they're grabbing their kids - like he's going to eat them or something."

However, make no mistake - Jessica and Nick absolutely adore Rocko, their  friend "with a good heart and good stomach." And how can anyone not? Just look at the no-so-little-but-just-as-adorable pooch:

Rocko might be the world’s tallest dog Meet Rocko: He’s a Great Dane, stands 7 feet tall and is now vying for a...

Posted by CCTVNews on Thursday, 28 January 2016