They Were Looking For A Place To Smoke Weed, Found Overweight Tiger Instead

"They were trying to get into this house to smoke marijuana. We questioned them as to whether they were under the effects of the drugs or they actually saw a tiger." 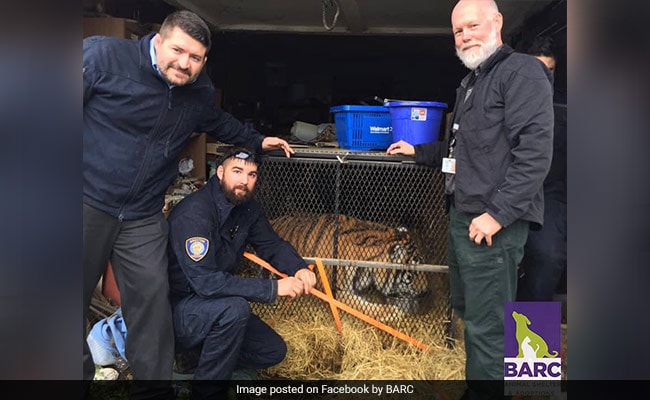 A picture of the tiger was shared by Houston's BARC animal shelter.

An anonymous tip from a "concerned citizen" led to the discovery of a tiger in a vacant home in Houston, Texas, on Monday. According to ABC News, Houston Police Department's Major Offenders, Livestock Animal Cruelty Unit arrived at the scene after receiving the tip to find a 1000-pound tiger (approximately 453 kgs).

The female tiger was found in a cage with several packets of meat.

"A concerned citizen called 311. They were trying to get into this house to smoke marijuana. We questioned them as to whether they were under the effects of the drugs or they actually saw a tiger. They saw a tiger in this building, this vacant house that's obviously been abandoned for some time," said Sergeant Jason Alderete of Houston Police.

Congratulations to our @BARC_Houston
Animal Enforcement Officers on a job well done. Earlier Monday, they followed up on an anonymous tip from a concerned citizen regarding a tiger.https://t.co/AAv71RCtUrpic.twitter.com/ComVF8JZS0

"We deal with, for the most part, puppies and kittens," she said. "Very, very rarely do we take in a tiger."

News of the tiger has created quite a buzz on social media, and reactions have even been curated into their own Twitter Moment titled 'Overweight tiger found in abandoned US home'.

Houston Zoo said in a statement that it would not be able to take the tiger. However, according to KHOU, an animal sanctuary in Texas has agreed to take it in.