These Rajinikanth Fans Are Getting the Day Off to Watch Kabali 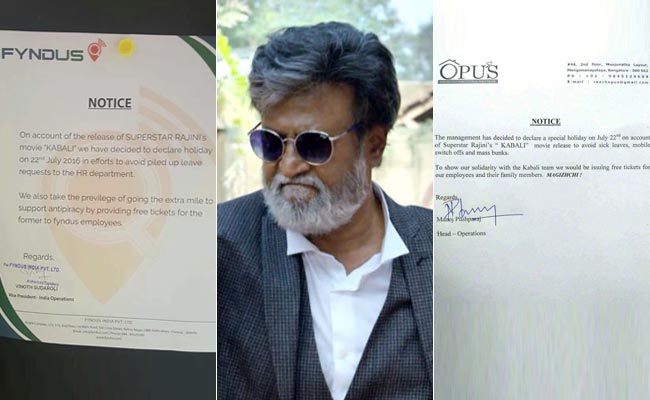 Rajinikanth, who is not so much a force of nature as an entire weather system, returns to the screen in Friday's film Kabali. For many fans, this is an occasion that merits a day off from work.

Some offices have declared Friday a holiday as a pre-emptive measure. Thus have Chennai startup Fyndus and Bengaluru company Opus prevented a potential mass exodus caused by Kabali-watching:

One more this is HUGE , this is MAGNANIMOUS , v r BATISTA .. THALAIVAR craze kabalipic.twitter.com/RrlZVBkZnV

On Sunday, a flashmob performed a Kabali-themed dance routine in a Chennai cinema with accompanying anti-piracy messages urging cine-goers to watch the film in theatres. On Friday, an Air Asia plane decked out in Kabali-themed livery will fly fans from Bengaluru to Chennai for the movie's fist show.