The smog crisis is so bad, experts have warned that breathing polluted air is equivalent to smoking multiple cigarettes a day 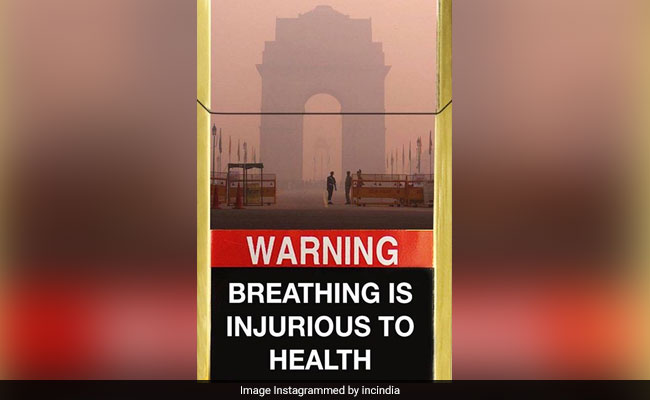 Delhi has been battling severe air pollution since Diwali. The smog from farm fires, stubble burning and unfavourable weather has pushed pollution in Delhi-NCR towards the "emergency" zone, prompting authorities to order closure of schools till November 15 - a second time in two weeks. Today, the Air Quality Index (AQI) docked at 472 with particulate matter (PM) 2.5 levels at 322 and PM 10 levels at 487 at 8:30 in the morning, said System of Air Quality and Weather Forecasting And Research (SAFAR).

In the midst of this, Delhi residents have taken recourse to witty posts and jokes to talk about the city's air pollution problem. Since Diwali, posts on #DelhiPollution have flooded social media. We compiled some of the best ones for you:

The Congress shared an image today that reimagined the warning on a packet of cigarettes to say: "Breathing is injurious to health".

Pollution in Delhi reaches emergency levels once again & schools across the capital city have been forced to shut down. Once again the govt. remains conspicuously silent on this grave health emergency. #DelhiPollution

Their witty post was widely appreciated, collecting over 2,300 'likes' within an hour of being posted.

Many criticised the rapid deterioration of air quality in the national capital with a viral meme. The meme, when translated, reads: "Till when will you spend your life with cigarettes, beedis and cigars. Spend a few days in Delhi-NCR."

Air quality in Delhi is the worst in the world pic.twitter.com/7Z6W0xHHl8

"Sheher nahi zeher (Poison, not city)" one Twitter user wrote while sharing a picture of Delhi covered in a blanket of haze

This is at 10 in Delhi. Shame on @ArvindKejriwal@narendramodi@PrakashJavdekar and shame on us for putting up with this and electing such inefficient leaders to lead us who can't ensure our basic right of breathing fresh air.#DelhiAirEmergency#DelhiAirPollution#DelhiPollutionpic.twitter.com/lwf08FVa2K

This cartoon describes the situation in Delhi

"Smog filter for today Because Instagram filters are too mainstream!"

On Wednesday, Delhi Chief Minister Arvind Kejriwal said that the odd-even scheme in Delhi that ends on Friday may get extended if needed.