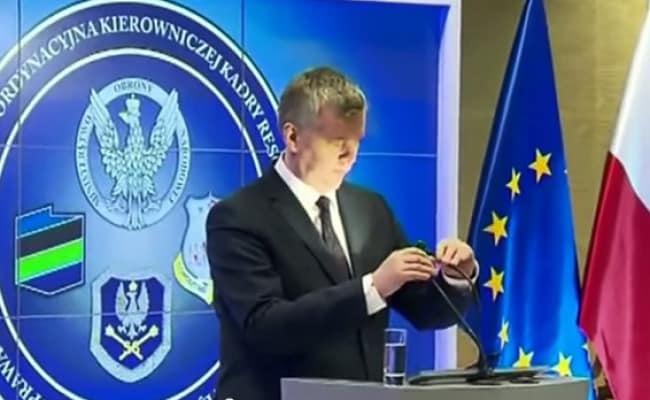 Tomasz Siemoniak, Poland's Deputy Prime Minister and Minister of Defence, is in the news for reasons you'd never ever expect. At an annual political meeting where the 47 year-old was supposed to address the Prime Minister and the who's who of the Polish government, Mr Siemoniak walked onto the podium, pulled the mic in his direction and began reading out his speech.

Only, he hadn't *just* pulled the mic towards him, but also the small desk lamp which had been provided to help him read better.

The minister however continued reading, oblivious to the intense glare of the tiny spotlight on his face. The internet is not one to let such bloopers go by. Soon enough, a video of Mr Siemoniak's speech went up on YouTube and currently has over six lakh views.

Uploaded by user Endriuu on his YouTube channel, the video's received unflattering comments from netizens who cannot get over the fact that the Defense Minister 'cannot differentiate between a lamp and a mic'.

Comments about the Defence Minister's 'time under the spotlight' also spilled over to Twitter:

Polish Minister of Defence used a torch as a microphone. What can B said about the rest of their army?: https://t.co/ECpuJckCYC via @YouTube

The Defense Minister of Poland became a YouTube star as the man who "can't tell a mic from a lamp."... http://t.co/MMaTQ4iEmm