Teary-Eyed Boy Refuses To Give Up Until He Breaks Karate Board. Dwayne Johnson Shares Video

Over 10 million views for this heartwarming video. 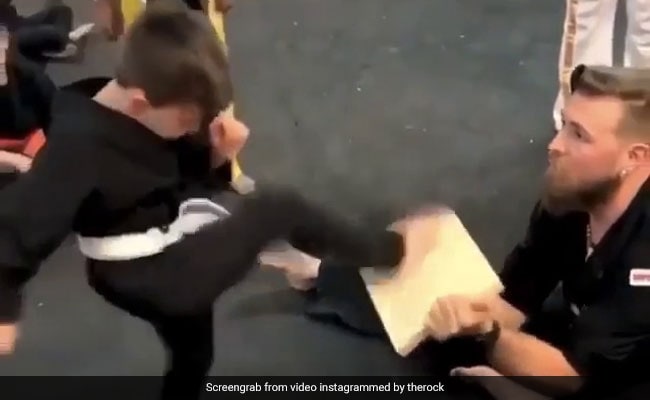 Phoenix, 5, managed to break the board after several failed attempts.

Hollywood actor Dwayne Johnson has shared a heartwarming video as a testament to the power of encouragement and support. The video, which went viral last year, shows a five-year-old boy struggling to break a board during karate practice. Eventually, encouraged by the words of his instructor and the supportive chant taken up by his peers, the teary-eyed little boy manages to snap the board in half after a few failed attempts.

Claudia Swonger filmed her son, Phoenix, acing the karate move and learning a valuable life lesson in perseverance during his karate class in Florida.

The heartwarming video was reposted on Instagram by Dwayne Johnson a few hours ago. Mr Johnson said he loved "every single thing" about the video and hailed it as "a moment that changed this little boy's life forever."

He also praised the instructor for constantly encouraging the young boy and talking to him until he succeeded in breaking the board. "Sensei @gianinibjjstallion never took his eyes off the boy and made sure the boy heard every word he was telling him," the actor wrote.

"Then this entire dojo of kids chanting, 'beat it' to support and lift his spirits.

"But here's the best thing about all of this - with all this beautiful support and love surrounding him - the final decision to break the board, came from the little boy."

The video has been viewed a whopping 10 million times on Instagram, with hundreds of people praising the boy for his perseverance.

"The most beautiful video ever," wrote one person in the comments section.

"Little man is a champ," said another.