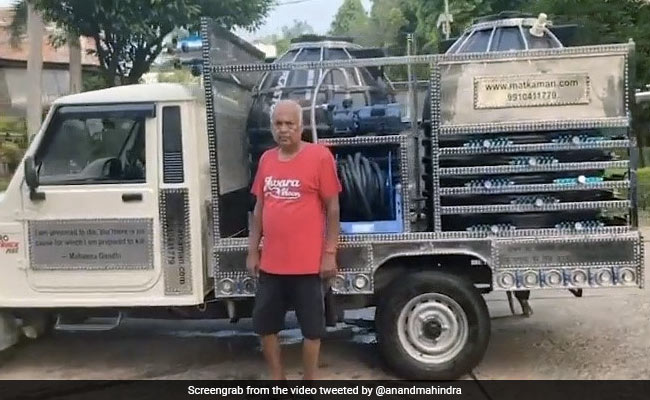 Anand Mahindra has shared a post of appreciation for Alag Natarajan aka 'Matka Man' - a Delhi man on a mission to provide drinking water to the city's millions. Mr Natarajan, a Panchsheel Park resident, drives around in his SUV every day, filling clay pots across South Delhi with clean drinking water. "A matka is an Indian clay pot traditionally used to store and keep water cold," he explains on his website. "I am using matkas to provide drinking water to poor people."

What started as one earthen pot of water outside his house has now transformed into a mission to place matkas across South Delhi. His initiative has earned Mr Natarajan the nickname of 'Matka Man'. According to the New Indian Express, Mr Natarajan today wakes up at five every morning to fill around 70 to 80 pots of water from which people can drink free of charge.

"A Superhero that's more powerful than the entire Marvel stable," Anand Mahindra, Chairman of Mahindra Group, said in a tweet of appreciation for the South Delhi resident. He thanked Mr Natarajan for choosing the Mahindra Bolero SUV for his "noble work".

In his tweet, Mr Mahindra also lauded Delhi's 'Matka Man' for returning to his hometown to serve the poor after spending over three decades in London. "Apparently he was an entrepreneur in England and a cancer conqueror who returned to India to quietly serve the poor," he wrote.

Mr Mahindra also shared a video of Alag Natarajan and his Bolero, which he uses to tow around water tanks. Watch the video below:

A Superhero that's more powerful than the entire Marvel stable. MatkaMan. Apparently he was an entrepreneur in England & a cancer conqueror who returned to India to quietly serve the poor. Thank you Sir, for honouring the Bolero by making it a part of your noble work. ???????? pic.twitter.com/jXVKo048by

The tweet has gone viral with nearly 4,000 'likes' and hundreds of comments praising Mr Natrajan.

Salute to the unsung hero. And thanks @anandmahindra for bringing it to the notice of tweeples. Though usage of Bolero was important for you, but you still revered the MATKAMAN. https://t.co/kQRudJK2DL

According to his website, Mr Natarajan's Mahindra Bolero maxi-truck is fitted with two 1000-litre water tanks. "I have engineered both my vans as a spectacle. I want to draw attention to my project and I enjoy the artistry of the work," he says.

Besides providing water to Delhi residents, Mr Natarajan drives around to provide food to construction workers and labourers two or three times a week. He has also placed around 100 cycle pumps across South Delhi "to give poor people the flexibility to fill air 24/7."