Sonam Kapoor Trolled By Twitter's Mathematicians For Answer To This Puzzle 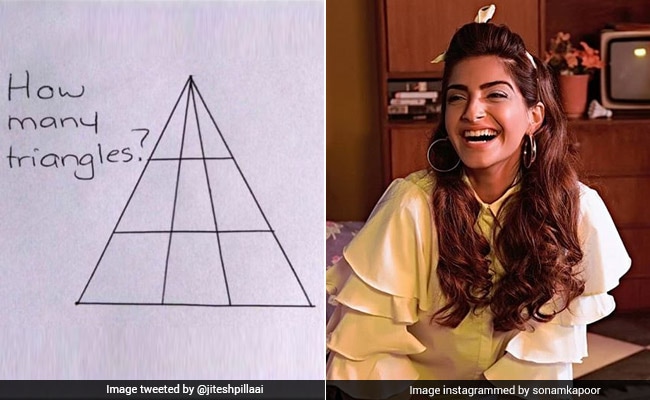 Sonam Kapoor shared what she thought was the correct answer to the puzzle.

If there's one thing people love on the Internet, it's puzzles. One random post or WhatsApp forward about a question based on reasoning or logic, or a picture showing a mathematical problem and most people on social media will try to solve it. The more answers the puzzle gets, the more people either want to either debunk it or explain how that answer was achieved. Sometimes, things even get ugly as people turn on one another and get mean trying to prove their conclusion is the best. That's basically what happened after Filmfare magazine editor Jitesh Pillaai posted a puzzle and actor Sonam Kapoor shared what she thought was the correct answer.

About two hours before writing this, Mr Pillaai posted this puzzle. It simply asks people to calculate the number of triangles in the picture and share the answer.

The puzzle seems interesting, right? Well, just like everyone trying to find the right answer, the Neerja actor also tweeted what she thought was the answer.

Turns out, Twitter couldn't handle the wrong answer given by the actor. She was immediately trolled by Twitter's mathematicians. (Because, OMG, how dare a celebrity do something to prove they're - gasp - human. Chill, Twitter!)

Guess what, Twitter. Sonam has a better sense of humour than you. She subsequently posted these two tweets, not only accepting that her answer was incorrect but also admitting that she doesn't know the right answer.

"Acknowledgement of being terrible at math is way better than the relentless stabs most (not quite) mathematicians take at these answers on the social media," said a Twitter user. We couldn't agree more.

Promoted
Listen to the latest songs, only on JioSaavn.com
Anyway, back to the puzzle. In case you were wondering, most people suggest the correct answer is 18.

Tell us what you think is the right answer in the comments section.Click for more trending news