"A hawk tried to catch the snake, who wasn't having it." 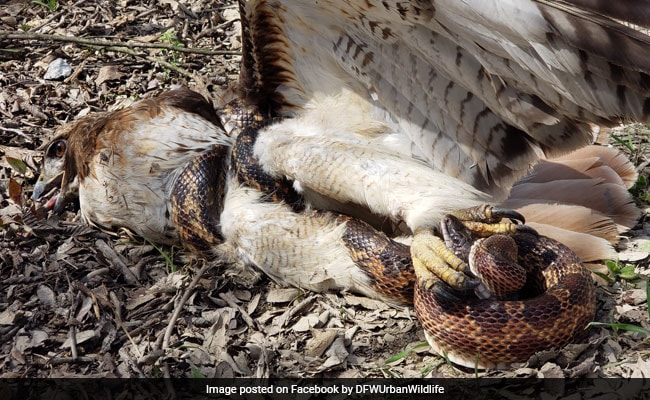 A picture shared by Texas Parks and Wildlife-DFW Urban Wildlife.

Schoolchildren in Texas, while on a field trip in Northwest, recently came across the shocking sight of a hawk and a snake engaged in a fight. Seventh graders saw a huge western rat snake wrapped around a red-tailed hawk at the Northwest Independent School District's Outdoor Learning Center, according to a Facebook post by Texas Parks and Wildlife-DFW Urban Wildlife. In this fight, however, there were no winners or losers - as both the hawk and the snake survived the battle.

As per Texas Parks and Wildlife, the children thought that the hawk and snake were dead, and informed employees of the learning centre - who arrived at the scene to take stock of the situation.

"After close inspection, both animals were still alive. One let go of the other (not sure which one let go first!), and the hawk flew off and the snake slithered away," wrote Texas Parks and Wildlife-DFW Urban Wildlife.

Meanwhile, in a separate post, Texas Parks and Wildlife described the incident as a "life-or-death battle".

"A hawk tried to catch the snake, who wasn't having it. The two were separated and their parents have been notified," they quipped.

Pics of the hawk and the rat snake have been 'shared' over 2,700 times, and have collected almost 5,000 reactions. While some expressed surprise that the hawk didn't win the fight, others marvelled at the rare sight.

"Nice, normally the hawk wins," wrote one person in the comments section. "Rare indeed to come across. Wow!" said another.

This isn't the only time social media has been taken in by a snake vs bird fight. In February, a video of a python eating a bird went viral.