She Was Trapped Inside Sinking SUV. Strangers Came Together To Rescue Her

The strangers swam to the car and rescued the woman 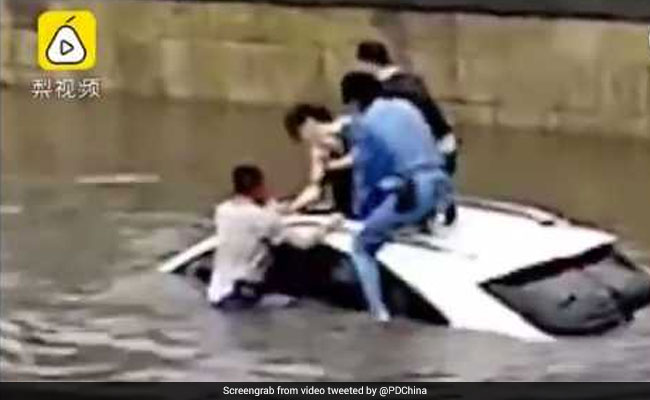 The video was recorded in Zibo located in China's Shandong province on May 16.

It's always heartening to see or hear of people who go out of their way to help another individual and this video, shot in China, shows exactly that. The clip shared on Twitter by People's Daily, China shows the moment strangers rescued a woman trapped inside her car during a flood.

The footage shows a car completely submerged in flood water. A man is seen climbing over the car while two others are seen swimming through the water in order to reach it. It becomes clear that someone is trapped inside the car and the men are trying to help rescue them. One of the men is seen trying to break open the sunroof of the car as that's the only part of the vehicle that is still above water. Once the sunroof comes undone, the man pulls a woman out of the car.

The video was recorded in Zibo located in China's Shandong province on May 16.

Promoted
Listen to the latest songs, only on JioSaavn.com
"Thank god almighty for good people like these. Helping save folks in need," says one Twitter user on the video. "Big thumbs up to the rescuers! Our world is a better place with the likes of you. Much respect for you," says another.

This isn't the first time someone has gone out of their way to help a stranger. Just a day ago, a heartening video showed a delivery man's kind gesture towards children. He used a genius trick to help children stranded on a flooded street and in turn won several hearts.Click for more trending news